The Directorate of Aeronautical Engineering (DAE) of the Royal Thai Air Force (RTAF) has issued what appears to be a note on a budget proposal to upgrade the service’s 11 Saab JAS 39 Gripen C/D multirole combat aircraft to the latest MS20 standard, Janes learned on 3 March.

The budget allocation proposal, which dates back to about mid-January, quotes a maximum price of THB631.73 million (USD20.84 million) and a mid-price of THB629.22 million, the latter sourced from the Swedish Defence Materiel Administration, for the initial phase of the programme, according to documents published by the RTAF. 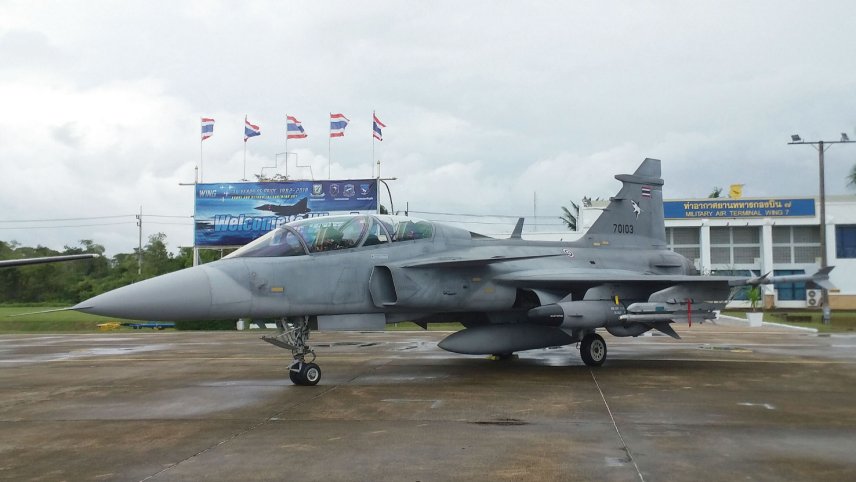 An RTAF Gripen D on the tarmac at Surat Thani Air Force Base, armed with RBS15F anti-ship missiles, as well as AIM-9 Sidewinder and IRIS-T short-range air-to-air missiles. The service has awarded a contract to Sweden for the upgrade of its fleet of Gripen C/D multirole combat aircraft to the latest MS20 standard. (Janes/Gabriel Dominguez)

No formal contract for the Gripen’s MS20 upgrade has been announced by either Saab or the RTAF.

The requirement was reiterated in the RTAF’s 2020 White Paper, with an envisaged start date in 2021, although no information has been provided about when the upgrade work is set to be completed.

According to Saab, the MS20 upgrade, which involves hardware and software upgrades, is designed to enhance the Gripens’ ability to engage ground targets by incorporating unguided and laser-guided bombs into the aircraft’s payload inventory. The platform’s air-to-air capability is also set to be enhanced by the introduction of new radar modes. The MS20 standard, which offers an optional ground collision avoidance system (GCAS), will additionally enable the aircraft to fire MBDA’s Meteor beyond-visual-range air-to-air missile (BVRAAM).