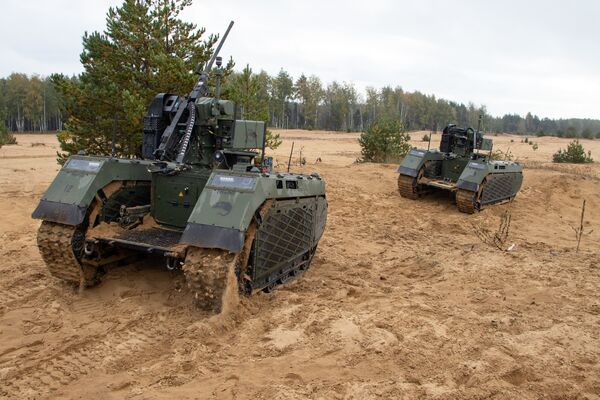 Four armed THeMIS UGVs were deployed with the Netherlands' 13th Light Brigade to Lithuania on 12 September, Lieutenant Colonel Sjoerd Mevissen, commander of the Royal Netherlands Army's Robotics and Autonomous Systems (RAS) unit, told Janes . The UGVs are currently undergoing trials with a view to developing and refining doctrine at the platoon level.

“We have deployed four weaponised [unmanned] machines within an operational experiment”, Lt Col Mevissen said. “To my knowledge, we have not seen this before in the West”.

He continued, “The machines have been handed over for experimental use in an operational unit in a military-relevant environment. These are not simply tests on a training ground. We are under the direct eyes and ears of the Russians, and as such in a semi-operational environment.”

An announcement by the Dutch Ministry of Defence (MoD) confirming the deployment was released on 14 October.

Janes understands that the deployment – consisting of 17 service personnel, two Bushmaster protected mobility vehicles, and a Fennek armoured fighting vehicle, in addition to the UGVs – is not part of the Dutch contribution to the NATO enhanced Forward Presence (eFP) in the country, and would be returned to the Netherlands should the eFP be mobilised.

The THeMIS medium UGV is produced by Estonian firm Milrem Robotics. The Dutch vehicles have been integrated with R400S Mk2 remote weapon stations produced by Australian firm Electro Optic Systems (EOS). The RWS are each equipped with a .50 cal machine gun.

The Royal Netherlands Army has become the first Western military to begin operational trials with ar...