Rheinmetall is proposing solutions to close the Bundeswehr’s short-range air defence capability (SHORAD) gap, especially for countering saturation attacks by unmanned aerial vehicles (UAVs). To fill this gap, the company said in a 30 September press release that it is offering a sensor mix consisting of various radars and electro-optical reconnaissance and surveillance assets and effectors including missiles, its Skyranger Boxer with a 35 mm gun firing air burst munition (ABM), and eventually high energy lasers (HELs). 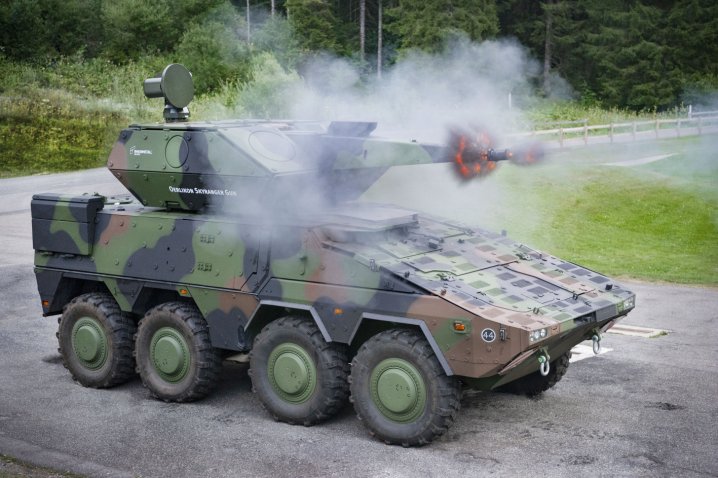 Rheinmetall demonstrated its Boxer Skyranger system against UAVs at its Ochsenboden firing range in Switzerland on 18–19 September 2018. (Rheinmetall)

During a press briefing of German journalists and Janes in Bonn on 30 September, Thomas Wehrhahn, who heads Rheinmetall’s German ground-based air defence (GBAD) activities, identified the trend “with considerable risk potential” of multiple UAV swarms saturating air defence systems, which could not be “meaningfully” countered by missiles or the Bundeswehr interim solution of a Boxer equipped with a 120˚ radar and 40 mm grenade machine gun (GMG) firing ABM. Instead, Wehrhahn offered a gun-based solution that is all-weather-capable and able to engage many more targets simultaneously. He said Skyranger, with a 3,000 m range, is the appropriate system for countering UAV threats like China’s Harwar-Zhanfu H16-V12, which is armed with two automatic grenade launchers and an air-to-ground missile, the latter giving it a stand-off capability.

The Serbian Ministry of Defence (MoD) announced on its website on 9 August that its Vojnotehnički In...