The first NG 130 mm smooth bore gun, unveiled at Eurosatory 2016 in Paris, is regarded as a technical demonstrator (TD) and Rheinmetall said it plans to offer this as the potential armament for the US Army Next Generation Combat Vehicle (NGCV).

A Rheinmetall representative, who requested anonymity, said the weapon is an L51 cannon and uses new high-strength steel, is chrome plated with a vertical sliding breech mechanism, electrical firing mechanism, and an increased chamber volume so more propellant can be used to enable higher muzzle velocities and therefore greater armour penetration characteristics. It is fitted with a thermal sleeve and muzzle reference system, according to the representative. 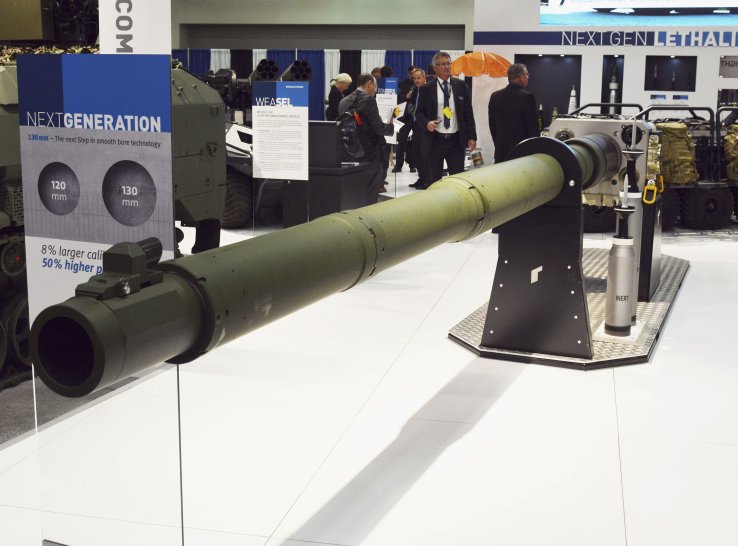 The Rheinmetall NG 130 mm tank gun is shown with two APFSDS rounds to the right. The first is a standard current 120 mm round with the second, to the rear, the much longer 130 mm round. (Jane’s/Patrick Allen)

Rheinmetall said the 6.63 m barrel weighs 3,000 kg, including the recoil system, but without the mounting components. The company representative confirmed that, by November 2019, about 80 rounds had been fired at its proving ground.

Rheinmetall Weapons and Ammunition “has completed developmental efforts” of an initial new Next Gene...

Thales' mortar production facility at La Ferte-Saint-Aubin will deliver the first of its 120 mm Rifl...