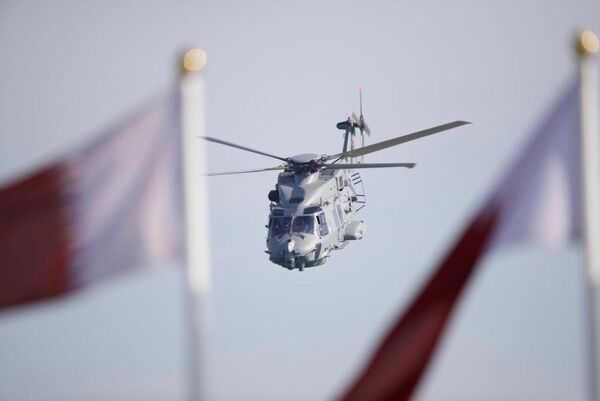 The Qatar Emiri Air Force (QEAF) publicly displayed its newest aircraft for the first time during the country's National Day parade on 18 December.

The televised parade along Doha's corniche began with a display by an FA-15QA Ababil multirole fighter with special ‘State of Qatar' markings. The Ministry of National Defense also released a video showing this aircraft with at least five other F-15QAs at a location that could be identified as Al-Udeid Air Base.

The first four of the 36 F-15QAs Qatar has ordered were seen flying from the United States to Qatar via RAF Mildenhall in the UK in late October. The ferry flight of a second batch was reported earlier in December.

Two NH90 helicopters also took part in the parade: one was a Tactical Transport Helicopter (TTH) variant, the other a NATO Frigate Helicopter (NFH). Qatar has ordered 16 of the former and 12 of the latter. Nathalie Tarnaud Laude, the head of the NH90 programme at Airbus Helicopters, announced via LinkedIn earlier in December that the first TTH had been handed over to Qatar.

Qatar's NH90 NFHs will be armed with MBDA's new Marte ER anti-ship missile. MBDA announced on 14 December that the missile had completed firing tests and is expected to enter service next year. Qatar will also use the Marte ER alongside longer-range Exocet MM40 Block 3 anti-ship missiles in a coastal-defence system.