The Qatar Joint Special Forces (QJSF) have signed an agreement with Barzan Holdings covering the delivery of vehicles from the Turkish company Nurol Makina, the Qatari Ministry of Defence (MoD) announced via its Twitter account on 23 August. It said the vehicles would be delivered in two batches, the first in 2021 and the second in 2022. 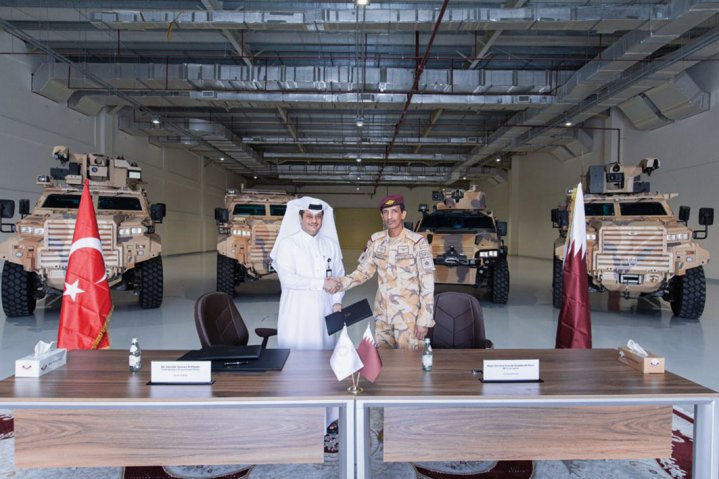 The agreement between the QJSF and Barzan Holdings was signed in front of three Ejder Yalçins and an NMS. (Qatari Ministry of Defence)

Barzan Holdings is owned by the MoD and was set up to develop the country’s defence industry.

The MoD did not state how many vehicles the agreement covers or identify the types. Nurol Makina told Janes that the Qatari MoD’s announcement was accurate but it could not provide more details at this time.

The photographs released with the announcement showed QJSF commander Major General Hamad bin Abdullah al-Fetais al-Marri and a Barzan representative standing in front of three Ejder Yalçin and one NMS light armoured vehicles, suggesting one or both types have been ordered.

Both are already in service with the Qatari military, having been publicly displayed for the first time in the December 2017 Independence Day parade.

Nurol announced during the DIMDEX show in Doha in March 2018 that it had signed a memorandum of understanding with Barzan Holdings and Maj Gen Marri to deliver 214 NMS vehicles. It also said Qatar had ordered 342 Ejder Yalçins. Some of the latter vehicles have been seen badged as QJSF vehicles.

The Qatar Joint Special Forces (QJSF) have signed an agreement with Barzan Holdings covering the del...