Pyongyang launches ‘railway missiles' in response to US sanctions 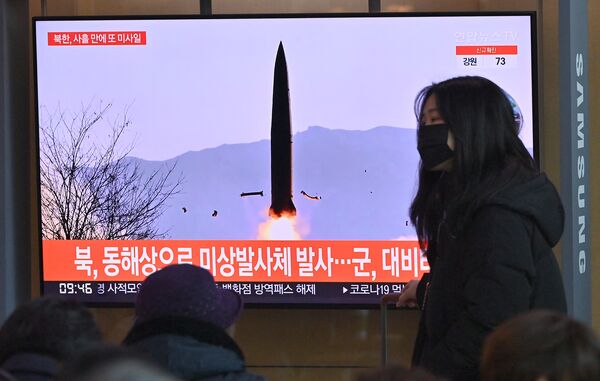 A woman walks past a television screen in Seoul showing a news broadcast with footage of North Korea's most recent missile test, which featured what appeared to be KN-23 short-range ballistic missiles. (Jung Yeon-je/AFP via Getty Images)

The government's Korean Central News Agency (KCNA) said on 15 January that the firing drill “checked the proficiency” of the missile regiment's procedures.

Janes analysis of images issued by KCNA suggests that the weapon is the KN-23 short-range ballistic missiles (SRBMs), the same type that the railway-borne missile regiment test-launched in September 2021.

KCNA also confirmed that the projectiles, which it termed as “tactical guided missiles”, were launched from North Pyongan Province, a northwestern region bordering China.

“The drill was aimed at checking the alert posture of the combatants of the regiment and bolstering their ability of discharging firepower mission,” it added.

The KCNA report said the missile launches were organised and executed at “short notice” and “precisely struck the set target” in the Sea of Japan (also known as East Sea).

It also indicated that the drills will support plans to further expand the railway-borne missile regiment, which was set up by the KPA in 2021. The drills were organised by the KPA and the missile's developer, the Academy of Defence Science (ADS), said the media outlet.

“The combat posture of the railway-borne missile regiment of North Pyongan Province … demonstrated high manoeuvrability, and [the] rate of hits in the drill was highly appreciated in the review,” said the KCNA report.

Two missiles that North Korea launched on 14 January were fired from the Korean People's Army's (KPA...