Poland to increase defence spending to 3% of GDP from 2023 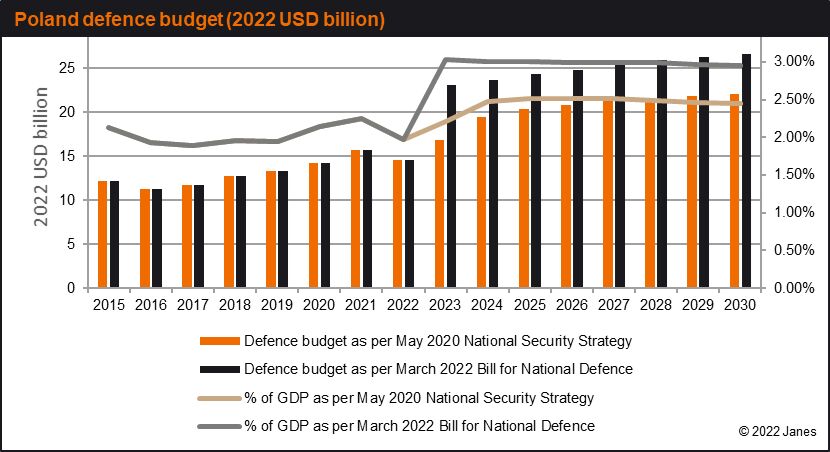 Minister of National Defence Mariusz Błaszczak told Poland's lower house of parliament on 3 March that defence spending should increase from the NATO-recommended 2% to 3% in 2023. He said this would enable Poland to increase the size of its armed forces, restore the reserve system, and modernise its equipment.

He made the announcement during the first reading of a new draft law on national defence. The bill envisions Poland roughly doubling the size of its military to 250,000 troops and adopting new funding mechanisms for its armed forces.

Poland is already spending 2% of GDP on defence and has been planning further increases. May 2020 national security strategy moved the goal of military expenditure reaching 2.5% of GDP forward to 2024 from 2030. This was largely on track, with Poland's 2021 defence budget seeing a 17% nominal increase and reaching 2.25% of GDP. The 2022 allocation for defence remained stable, dropping back to 2% of GDP. The 2022 budget reached USD14.5 billion in real terms, compared to USD10.3 billion in 2014.

A 65% nominal increase, or 60% in real terms, would be required for the budget to reach 3% of GDP next year. Poland would then be spending around USD23.1 billion on defence in 2023, further cementing its position as the highest defence spender in Eastern Europe. Compared to a more gradual increase to 2.5% of GDP in 2024, if the budget is brought to 3% in 2023 and kept at that level until 2030, an additional USD36 billion would be required during that timeframe.