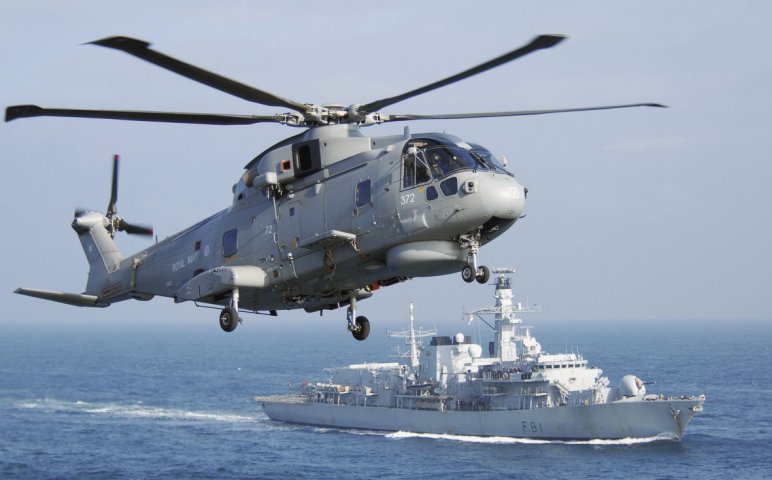 Seen here in UK Royal Navy service, the AW101 has been selected by Poland, primarily in an anti-submarine role but also with a secondary combat search-and-rescue role. (IHS Jane’s/Patrick Allen)

Polish Prime Minister Mateusz Morawiecki and Defence Minister Mariusz Blaszczak signed the contract for four helicopters at PZL-Świdnik’s facility in eastern Poland on 26 April. According to the Leonardo subsidiary, the value of the deal, which includes logistics, support, training, and a medical equipment package, is PLN1.65 billion (USD430 million).

As previously reported by Jane’s , Leonardo will provide PLN400 million of industrial offsets under the deal, which Poland will use to drive employment, national exports, and defence industrial development.

Neither the Polish Ministry of National Defence (MND) nor Leonardo disclosed a delivery timeline for the new helicopters, which will replace the Warsaw Pact-era Mil Mi-14 ‘Haze’ ASW helicopters in service with the Polish Navy. While the order announced is for four helicopters, there may be a follow-on order for a further four at a later date.

As noted by Leonardo, the AW101 is well suited to the overwater ASW and CSAR roles in that it benefits from three-engine safety; a full ice protection system for flight in known icing conditions; long range and endurance; a range of 1,300 km; and a proven 30-minute ‘run dry’ gearbox as well as multiple redundancy features in the avionic and mission systems. The large cabin doors and rear ramp provide easy access for personnel, survivors, and equipment into the 27 m 3 cabin, which has stand-up head room throughout.

Poland has signed for AgustaWestland AW101 helicopters to satisfy its anti-submarine warfare (ASW) a...