The two rotorcraft are expected to be deployed from the service's two new José Rizal-class frigates: BRP José Rizal (FF 150), which was commissioned in July 2020, and BRP Antonio Luna (FF 151), which entered service in March 2021.

However, the vice admiral said the aircraft's pilots and crew are still undergoing “mission essential and operation conversion training”, adding that the pilots have not yet been trained for deck-landing operations and integration on the José Rizal-class frigates. 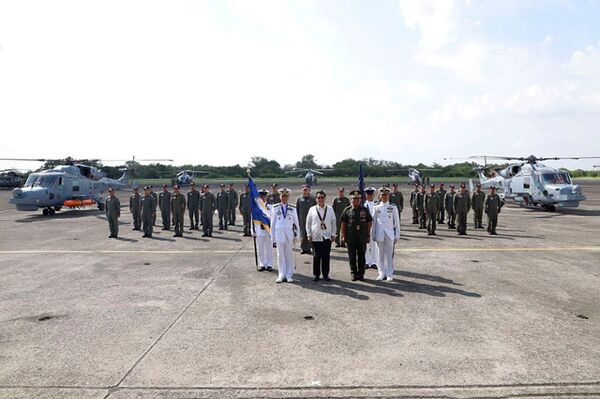 The pilots of the PN's two AW139s, seen here during their induction ceremony on 17 June, have yet to be trained for deck-landing operations and integration on the José Rizal-class frigates, according to PN chief Vice Adm Bacordo. (Philippine Navy)

According to Vice Adm Bacordo, the reason for this is that Leonardo instructors from the United Kingdom have yet to return to the Philippines to complete the training.

Among other things, the helicopters can be armed with Spike Non-Line-of-Sight (NLOS) air-to-surface missiles and Blue Shark lightweight torpedoes, both of which were delivered in the fourth quarter of 2019.

The two platforms were delivered in May 2019 and commissioned on 17 June of that year at Naval Base Heracleo Alano in Cavite City. The AW159s are operated by the Naval Air Wing's Squadron MH-40 at Danilo Atienza Air Base.