The US Army is asking Congress for USD84.5 million next year to continue Robotic Combat Vehicle (RCV) development and to help prepare for a solider experiment.

RCV fiscal year 2022 (FY 2022) funding is included in a ‘robotics development’ pot, and includes funding for development of both the light (RCV-L) and medium (RCV-M) prototypes.

So far, the service has acquired four RCV-L prototypes from QinetiQ North America and Pratt Miller (now acquired by Oshkosh Defense), and four RCV-M ones from a Textron Systems, Howe & Howe Technologies, and FLIR Systems team.

The RCV-Ls are tracked, diesel-electric hybrid platforms that weigh less than 10 tons, carry a maximum payload of 7,000 lb, travel up to 40 mph, and are outfitted with Kongsberg Defence & Aerospace’s Common Remotely Operated Weapon Stations - Javelin (CROWS-J).

Just days before the budget request was released, the service announced it had also received all four RCV-M prototypes after a slight delivery delay, and begun integrating autonomy packages onto the platforms.

These RCV-M prototypes are based on the Ripsaw M5 which weighs in around 10.5 tons, carries more than 8,000 lb, and can reach speeds of more than 40 mph. They include a diesel-electric hybrid drivetrain, an open architecture, flat deck for different payloads, and ‘scalable/configurable’ armour. This prototype vehicle is outfitted with Kongsberg’s PROTECTOR Medium Caliber Remote Weapon Station (MCT-30). 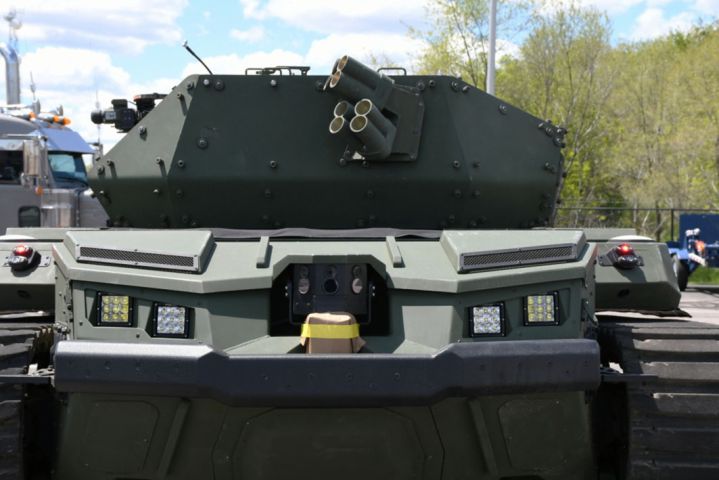 In May the US Army received its fourth RCV-M prototype. (US Army)

The US Army is asking Congress for USD84.5 million next year to continue Robotic Combat Vehicle (RCV...