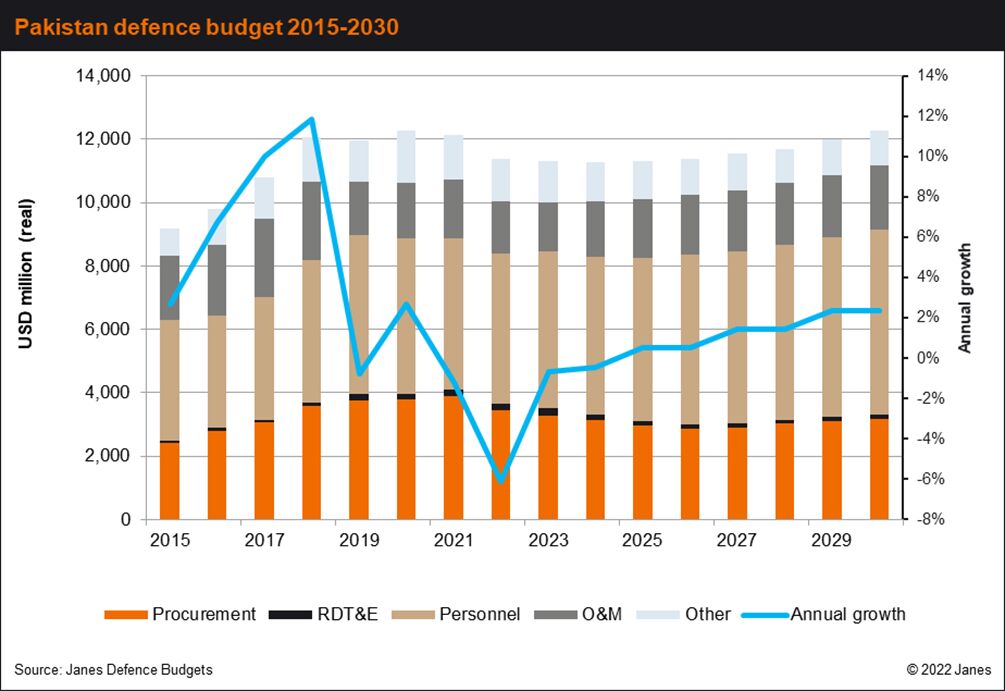 Pakistan's defence budget for 2022–23 represents a nominal increase. However, in real terms – and once inflation is accounted for – the military expenditure will decline. (Janes Defence Budgets)

The new budget represents about 16% of total government outlay for the year. However, growth in the defence expenditure is offset by rising inflation. Announcing the budget on 10 June, Finance Minister Miftah Ismail said inflation in Pakistan stands at nearly 12%, a 10-year high.

Budgetary documents show that the 2022–23 defence budget contains PKR567.5 billion for employees-related expenses, an increase of 1% over the revised allocation for 2021–22. The new budget also consists of PKR411.1 billion and PKR368.9 billion for physical assets and operating expenses, increases of 6% and 4%, respectively, over the revised expenditure.

Official documents did not provide a further breakdown. However, local media reported that the Pakistan Army will receive PKR724 billion, about 47% of the total defence budget. The Pakistan Air Force (PAF) and Pakistan Navy have been allocated PKR323.7 billion and PKR165.3 billion, 21% and 11%, respectively. The majority of the remainder is allocated for defence-wide requirements.

Official documents did not detail funding for the Pakistan military through the Armed Forces Development Programme (AFDP), which is thought to bolster the procurement expenditure. Janes has previously reported that AFDP funding has tended to be in the region of PKR50–80 billion.

Despite funding constraints, Pakistan's military has benefited from an increase in modernisation activity since the start of 2022.