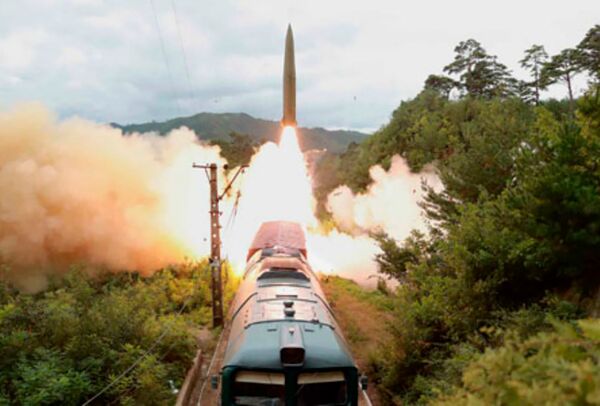 An image released by North Korean state media showing what appears to be a modified KN-23 SRBM being launched from railway-borne launch system on 15 September. (Rodong Sinmun)

Images released by the Korean Central News Agency (KCNA) indicate that Pyongyang test-launched on 15 September what appears to have been a modified variant of the KN-23 (US/South Korean designation) short-range ballistic missile (SRBM) from a railway-based launch system.

The state-run media outlet reported that the weapons were launched as part of a launch drill carried out by a “railway-borne missile regiment” that was set up earlier this year to bolster the country's capability to “deal simultaneous blows to threat-posing forces” in case of a conflict.

The aim of the drill was to “confirm the practicality” of the railway-based launch system, which was tested for the first time, as well as to assess the combat readiness and performance of the new regiment, noted the KCNA, adding that the exercise saw the SRBMs “accurately strike” their intended target area some 800 km away in the East Sea (also known as the Sea of Japan). The move marked the northeast Asian country's first ballistic missile launches in about six months.

Pak Jong Chon, a member of the Presidium of the Politburo of the ruling Workers' Party of Korea (WPK), was quoted as saying that there are plans to expand and reorganise the railway-borne missile regiment into a brigade in the near future and to conduct training to gain “the operational experience for actual war”.

The planned operational deployment of the new rail-based SRBM system is part of Pyongyang's goal to modernise the military while bolstering the country's deterrence posture, he added.