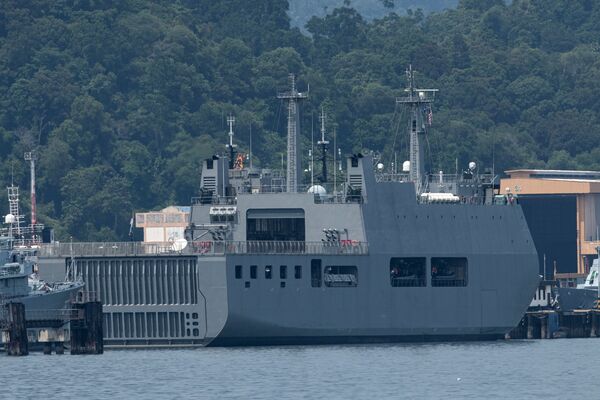 The Myanmar Navy has deployed UMS Mottama , its new landing platform dock, to support a buildup of ground forces in western Rakhine state. The vessel is pictured above in February 2021. (Mohd Rasfan/AFP via Getty Images)

The Myanmar Navy (MN) has deployed its largest capital vessel and flagship, UMS Mottama (1501), a new South Korean-built landing platform dock (LPD), to support a rapid buildup of ground forces in western Rakhine state where a ceasefire with the ethno-nationalist Arakan Army (AA) is under growing strain.

In late May, the Mottama sailed to the deep sea port of Kyaukphyu on the Rakhine coast in its first reported combat-related mission since it was commissioned in December 2019.

On 2 June, the 122-metre-long amphibious assault ship, reportedly transporting heavy artillery and rocket systems along with infantry forces, sailed further north along the coast to the dock at the riverine harbour of Ah Ngu Maw in Rathedaung Township.

The deployment of forces to Rathedaung is part of a broader reinforcement of the military's footprint in Rakhine involving a buildup based on Kyuakphu, where an estimated 1,000 additional troops have reportedly landed since last May.

Kyaukphyu is the site of a new Chinese-built deep sea port and special economic zone that constitute the Bay of Bengal terminus of the projected China-Myanmar Economic Corridor (CMEC), a key regional spoke of China's Belt and Road Initiative (BRI) linking Yunnan province with the Indian Ocean region.

The Myanmar Navy (MN) has deployed its largest capital vessel and flagship, UMS Mottama (1501), a ne...