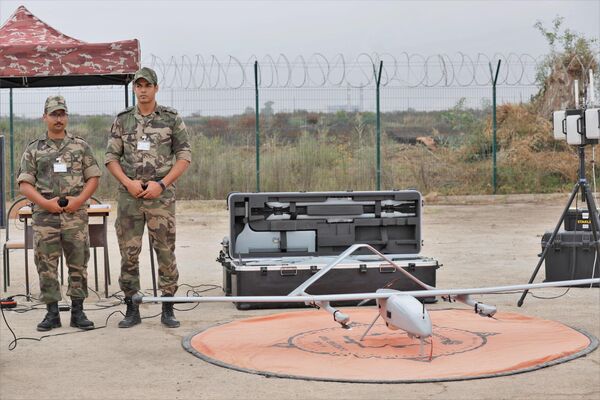 Moroccan personnel stand next to a BlueBird WanderB-VTOL UAV during Exercise ‘Maroc Mantlet 2022' at the Kenitra airbase. (Maroc Agence Presse)

The Royal Moroccan Armed Forces are using unmanned aerial vehicles (UAVs) made by the Israeli company BlueBird Aero Systems, it was confirmed during the ‘Maroc Mantlet 2022' disaster-response exercise.

Local media coverage of the exercise held at the 3rd Royal Air Force Base in Kénitra from 12 to 22 September showed Moroccan personnel displaying a WanderB with a second one disassembled in its box and a ground data terminal, which links the UAV to the portable control station.

The WanderB-vertical take-off and landing (VTOL) UAV is a smaller version of BlueBird's ThunderB-VTOL UAV. Designed for intelligence, surveillance, target acquisition, and reconnaissance (ISTAR), both types are fitted with four rotors for VTOL, as well as a pusher propeller for horizontal flight.

BlueBird confirmed that it has delivered both types to the North African country by posting a link on LinkedIn to a report by Morocco's Le Desk that noted the UAV in the exercise. The company said that the Royal Moroccan Army had purchased dozens of ThunderB-VTOL and WanderB-VTOL UAVs and that they are being used for ISTAR, border security, law enforcement, convoy and force protection, and artillery spotting.

A Moroccan order for BlueBird UAVs was first reported in February 2021.

The ThunderB-VTOL has a take-off weight of 35 kg, an endurance of 12 hours, and a communications range of 150 km. These specifications are reduced to 14 kg, 2.5 hours, and 50 km, respectively, for the WanderB-VTOL.

The Royal Moroccan Armed Forces are using unmanned aerial vehicles (UAVs) made by the Israeli compan...