More details have emerged about a new helicopter-launched anti-tank guided missile (ATGM) that was used in training exercises by the aviation units of the People’s Liberation Army Ground Force (PLAGF). 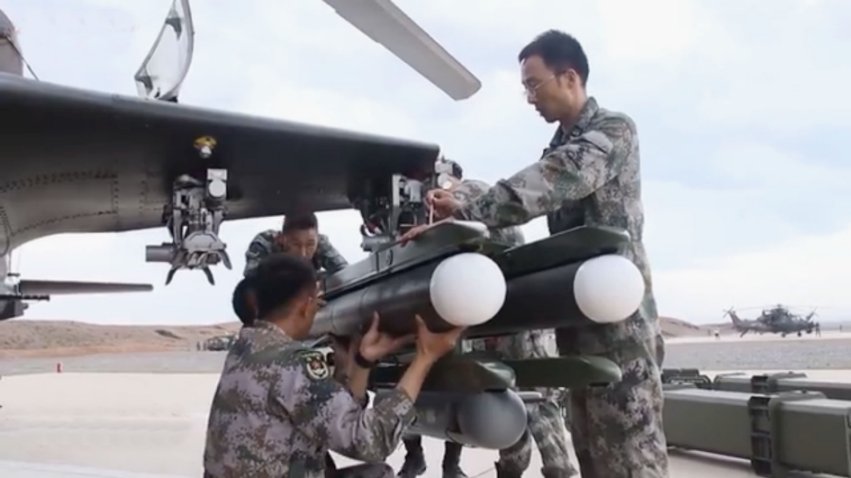 A screengrab from CCTV 7 footage released online on 6 August showing two units of a new ATGM being loaded onto one of the launchers of a PLAGF Z-10 attack helicopter. The launcher is also carrying what appears to be a pod. (Via js7tv.cn)

The missiles were shown striking targets, including tanks and other armoured vehicles, after being fired from some distance, suggesting that this is a fire-and-forget weapon. Each of the launchers under the helicopter’s stub-wings was seen carrying two missiles along with what appeared to pods, although their precise function was not immediately clear.

The Z-10s were seen working in conjunction with at least one Z-19A attack helicopter equipped with a mast-mounted millimetre-wave (MMW) radar that is similar in appearance to the Lockheed Martin AN/APG-78 Longbow fire-control radar fitted to the Boeing AH-64 Apache.

The BA-21 appears to be an improved export version of the AKD-10 third generation, precision-guided battlefield missile carried by the PLAGF’s Z-10 and Z-19 rotorcraft. The BA-21, of which no official information has emerged, is believed to have a range of about 18 km and be fitted with a dual-mode MMW radar/semi-active laser seeker.