The modernisation and mechanisation of the People's Liberation Army Ground Force's (PLAGF's) Xinjiang Military Command continues at a fast pace, with Chinese media revealing on 16 May that Xinjiang recently received elements of a medium combined arms battalion, including dozens of ZLB-09 (also known as Type 09)-series 8×8 platforms. 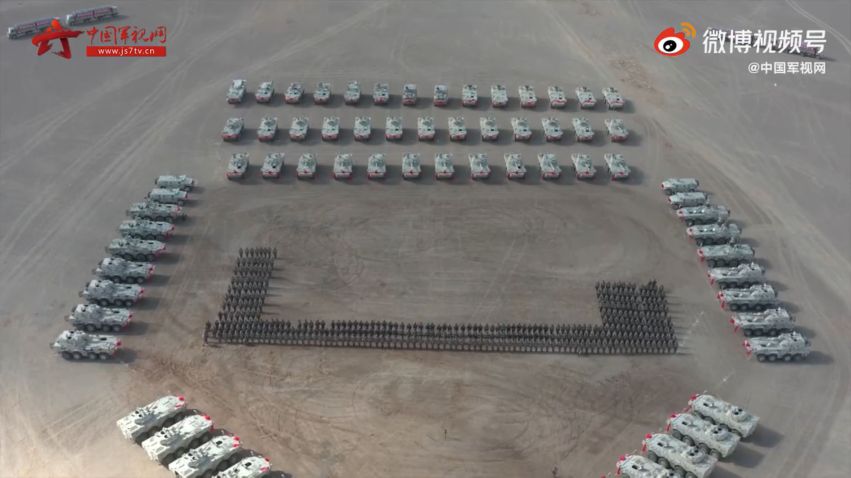 A screengrab from footage released by CCTV on 16 May of a recently held ceremony showing elements of a medium combined arms battalion entering service with the PLAGF’s Xinjiang Military Command. (CCTV)

At least 19 ZBL-09 infantry fighting vehicles (IFVs), six supporting elements – including a ZBL-09-based armoured recovery vehicle – as well as six command-and-control (C2) platforms based on the 8×8 hull were also present. The formation also included two 6×6 armoured vehicles, which are most likely from the ZSL-92 family, and may be mortar vehicles, although this has not been confirmed.

Elements of the artillery company typically assigned to a medium combined arms battalion were also present at the event and included at least eight PLL-09 122 mm self-propelled howitzers (SPHs) based on the ZBL-09 hull, two or more artillery reconnaissance vehicles from the ZBL-09 family, CSK181 4×4 protected mobility vehicles that appear to be used in support of artillery formations, and what are likely to be 8×8 C2 vehicles for the artillery company.

The modernisation and mechanisation of the People's Liberation Army Ground Force's (PLAGF's) Xinjian...