The Australian Defence Force (ADF) is extending the grounding of its fleet of 47 NHIndustries/Airbus MRH-90 Taipan multirole helicopters due to maintenance and safety issues, Janes has learnt.

The grounding began in May and normal operations now seem unlikely to resume for some time, Janes was told on 25 June by an informed source.

The Department of Defence (DoD) in Canberra said in a 16 June statement that MRH-90 flying operations have been temporarily suspended as a safety precaution, adding that the issue “relates to the application of the helicopter's maintenance policy in the helicopter's IT support system”. 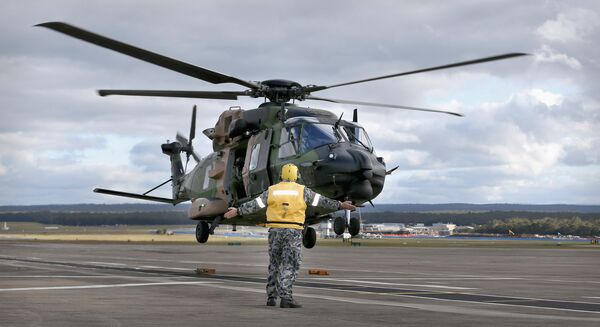 The ADF is extending the grounding of its fleet of 47 MRH-90 Taipan multirole helicopters due to maintenance and safety issues, Janes has learnt. (Royal Australian Navy/Commonwealth of Australia)

“Defence and Airbus Australia Pacific are currently working collaboratively to remediate this issue. Work continues to end this suspension as soon as possible,” noted the DoD.

The DoD declined to respond to questions on the statement.

This comes as a parliamentary committee was told on 1 June by Shane Fairweather, the first assistant secretary for rotary, aerospace, and surveillance systems at the DoD, that the MRH-90 airframe brought with it a very complex maintenance regime, while the delivery of serviceable aircraft was being slowed by supply and repair chain performance.

The MRH-90 fleet was grounded in 2019 following serious tail rotor vibration and delamination that required remediation of the tail rotors on all 47 aircraft, six of which are flown by the Royal Australian Navy (RAN).

The Australian Defence Force (ADF) is extending the grounding of its fleet of 47 NHIndustries/Airbus...