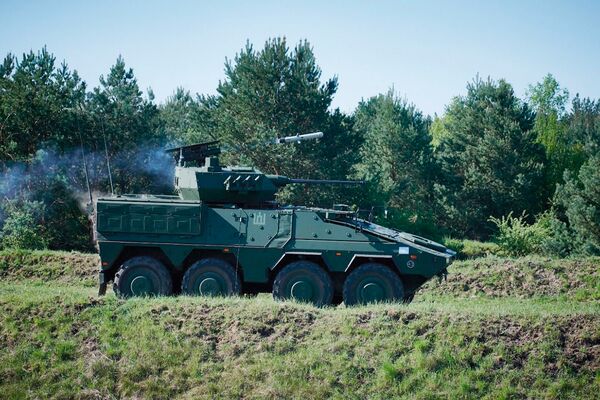 The Lithuanian Army's most important projects include equipping units declared to NATO and the army's rapid reaction force with IFVs. Seen here is a Lithuanian Boxer armoured vehicle. (Lithuanian MND/ARTEC)

The Lithuanian government presented a draft state budget for 2022, increasing national defence spending to EUR1.176 billion (USD1.367 billion), the Ministry of National Defence (MND) announced on its website on 12 October.

Finance Minister Gintarė Skaistė told a press conference the day before that this would raise defence spending from 2.03% in 2021 to 2.05% in 2022, Lithuanian Radio and Television (LRT) reported on its website on 11 October. She added that Lithuanian political parties support the gradual increase of defence spending to 2.5% of GDP by 2030.

The MND quoted Minister of National Defense Arvydas Anušauskas as saying the budget increase would allow the continuation of the Lithuanian Army's most important projects. These include the implementation of a medium-range air-defence system; equipping units declared to NATO and the army's rapid reaction force with infantry fighting vehicles (IFVs) in 2023; increasing naval minehunting capabilities in 2024; meeting Lithuania's obligations to make battalion groups available to NATO and the rapid reaction force; achieving a maritime situational-awareness capability; and supplying units declared to NATO and the rapid reaction force with armoured utility vehicles. In addition, Lithuania plans to acquire medium-range mobile radars in 2025 and complete the second phases of the procurement of IFVs and armoured utility vehicles for its army by 2031.

The Lithuanian defence budget follows NATO's recommendations of allocating no more than 50% of military spending to personnel retention and at least 20% to major acquisitions, according to the MND.

Japan is building an amphibious assault vehicle (AAV) demonstrator that is expected to be completed ...
Request Consultation