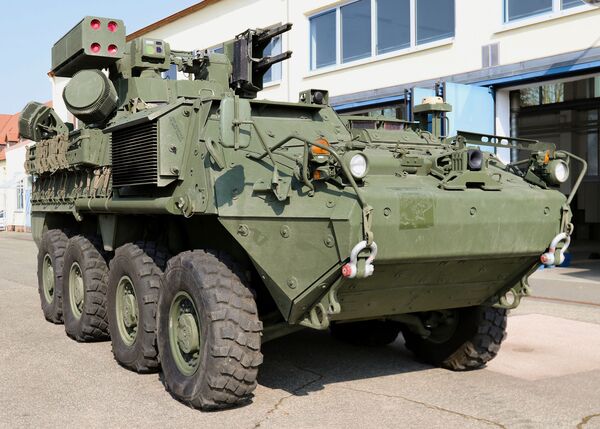 Leonardo DRS and RADA partner on the mission equipment package that is mounted on a Stryker ground vehicle for the US Army's Maneuver Short Range Air Defense system. (US Army)

Leonardo DRS, the US defence subsidiary of Italy's Leonardo, and Israeli radar provider RADA 0Electronic Industries announced on 21 June that they have agreed to merge to improve their competitiveness in the fast-growing areas of sensing and force protection.

The all-stock transaction will strengthen DRS's position in air defence, counter-drone, and vehicle protection systems, while giving RADA access to the resources of a larger firm, the joint announcement said.

RADA will gain scale and programme diversity “that they don't have as a small company”, William Lynn, DRS chairman and CEO told analysts. “For us, it gives us the one sensor we don't have: radar.”

The combined company will be publicly traded and will have about USD2.7 billion in annual revenue. DRS and RADA generated revenue of USD2.6 billion and USD117 million, respectively, in 2021.

Under the merger, which is expected to close in the fourth quarter of 2022 after receiving regulatory and RADA shareholder approval, Leonardo will own about 80.5% of the combined company, while RADA shareholders will hold the remaining 19.5%. RADA will become a wholly owned subsidiary of DRS, whose stock will be listed on the Nasdaq and the Tel Aviv Stock Exchange (TASE) under the “DRS” ticker symbol.