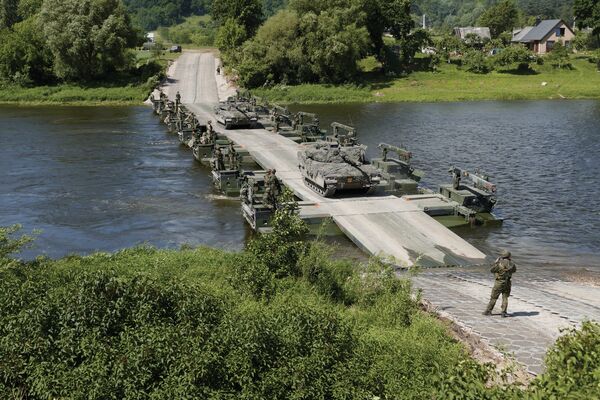 A number of M3 units forming a pontoon bridge. The four units gifted to Latvia will enhance NATO's wet-gap crossing capabilities in the Baltics. (GDELS)

Latvia is to become the latest operator of the M3 amphibious bridge and ferry system made by General Dynamics European Land Systems (GDELS), the company announced on 6 October.

Four M3 units are being provided, a GDELS spokesperson told Janes , with the contract for them covered by the US Army under an initiative to help Latvia address a NATO requirement for additional wet-gap crossing solutions in the Baltics. GDELS declined to put a value on the contract.

“This procurement is another milestone marking transatlantic co-operation and the necessity of mobility and interoperability for allied forces,” Dr Thomas Kauffmann, vice-president of international business and services for GDELS, was quoted as saying in a 6 October company press release.

The M3 system is already used by the German and British armies in Europe, as well as the armed forces of Indonesia, Singapore, South Korea, and Taiwan in Asia. Multiple units of the system can be used together to form a pontoon bridge, or an individual M3 can be used as a ferry platform. The system can carry all current main battle tanks.

Dr Christian Kauth, GDELS vice-president and managing director for bridge systems, noted that the Latvian M3s “will also be equipped with ‘Arctic kits' that will allow [the Latvian Land Forces] to operate them in very cold climate conditions”.

The US Air Force (USAF) has launched an effort to replace its ageing fleet of Boeing E-3 Sentry Airb...

Boeing will consider offering the T-7A Red Hawk aircraft to the US Air Force (USAF) for its recently...