In a sign of growing military co-operation between Moscow and Beijing, about 13,000 Russian and Chinese troops have taken part in the ‘Sibu/Interaction 2021' exercise, marking the first time that such joint strategic military drills are held in China.

The five-day-long manoeuvres began on 9 August at the Qingtongxia combat training base in the Ningxia Hui Autonomous Region in north-central China. 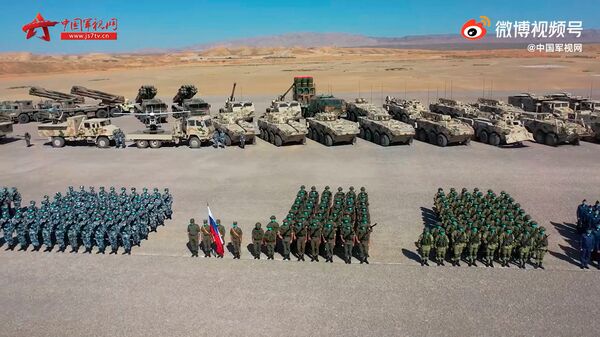 A screengrab from footage released by CCTV on 9 August showing Russian and Chinese troops, along with related equipment, during a ceremony held that day at the Qingtongxia combat training base in China's Ningxia Hui Autonomous Region to mark the start of the five-day-long ‘Sibu/Interaction 2021' strategic military exercise. (CCTV)

Taking part in the large-scale manoeuvres were mainly troops from the PLA's Western Theatre Command and Russia's Eastern Military District, with the Chinese Ministry of National Defense (MND) saying ahead of the drills that they were aimed at “verifying and improving the troops' capabilities of joint reconnaissance, search and early warning, electronic information attack, and joint strike and elimination”.

The MND in Beijing said the broader goals of the exercise were to “consolidate and develop the Sino-Russian comprehensive strategic partnership of co-ordination in the new era, deepen the practical co-operation and traditional friendship between the two militaries, and further demonstrate the two sides' resolve and capability to fight against terrorist forces and jointly safeguard regional peace and security”.

The exercise was also attended by Lieutenant-General Mikhail Nosulev, the deputy commander of Russia's Eastern Military District, who stated, “We intend to exchange combat experience and, in practice, develop the joint use of the troops of our countries.”

In a sign of growing military co-operation between Moscow and Beijing, about 13,000 Russian and Chin...