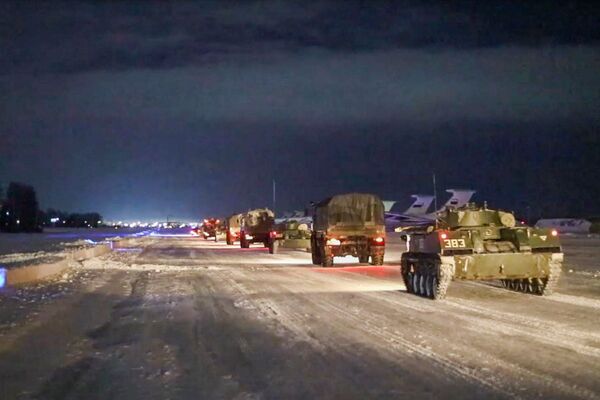 A Russian-led rapid reaction force (RRF) began deploying to Kazakhstan in the early hours of 6 January following a request by the Central Asian country's president, Kassym-Jomart Tokayev, the day before for support from the Collective Security Treaty Organization (CSTO) in the face of civil unrest.

Russian Aerospace Forces transport aircraft began deploying Russian forces to Almaty and Zhetigen air bases in Kazakhstan, arriving at around 0300 h local time on 6 January. They were followed by troops from Armenia, Belarus, Kyrgyzstan, and Tajikistan.

The Russian Ministry of Defence's TV Zvezda reported on its website on 7 January that the airlift involved 70 Il-76 and five An-124-1003 transports and that Russian Airborne Forces (VDV) commander Colonel General Andrei Serdyukov had been appointed to lead the CSTO RRF.

CSTO Secretary General Stanislav Zas told Russian newspaper Kommersant on 6 January that the RRF would number around 2,500 personnel from all participating countries and could be reinforced if necessary. He expected the RRF to remain in Kazakhstan for “several days or several weeks”, depending on the situation on the ground and the position of the Kazakh government. If the situation stabilised, the operation would end and all forces would be withdrawn, Zas added.

However, Russia's REN TV reported on 6 January that the Central Military District's 2nd and 24th Spetsnaz Brigades in Samara and Novosibirsk, respectively, had been placed on standby to deploy at short notice.

A Russian-led rapid reaction force (RRF) began deploying to Kazakhstan in the early hours of 6 Janua...