Mitsubishi Heavy Industries (MHI) has launched the third of a planned fleet of 22 Mogami-class multirole frigates for the Japan Maritime Self-Defense Force (JMSDF). 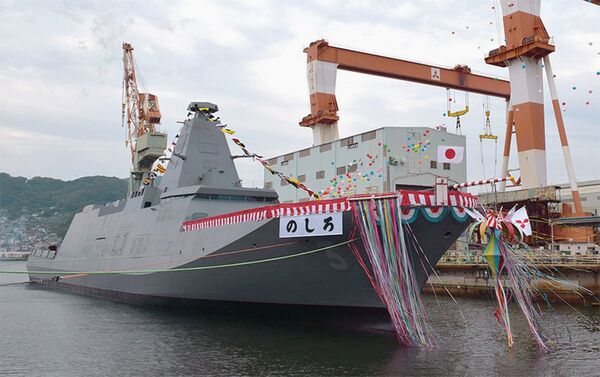 MHI launched Noshiro , the third Mogami-class frigate on order for the JMSDF, in a ceremony held on 22 June at its facilities in Nagasaki. (Mitsubishi Heavy Industries)

Named Noshiro , the 133 m-long vessel (pennant number 3) entered the water in a ceremony held on 22 June at the company's Nagasaki Shipyard & Machinery Works in Nagasaki Prefecture, and is expected to enter JMSDF service in fiscal year 2022–23.

Noshiro is being built for about JPY47.6 billion (USD431 million) under a contract awarded in January 2020, according to an MHI spokesperson. As with the other ships of the class, the 3,900-tonne vessel will have a crew complement of about 90, a beam of 16.3 m, and a hull draught of 9 m.

Powered by a combined diesel and gas (CODAG) propulsion system featuring two MAN 12V28/33D STC diesel engines and one Rolls-Royce MT30 gas turbine, the Mogami-class warships are expected to be capable of attaining a top speed of at least 30 kt.

Armament on the frigates is expected to include the navalised version of the Type-03 (also known as the ‘Chū-SAM Kai') medium-range, surface-to-air missile, a 5-inch (127 mm)/62-calibre gun, canister-launched anti-ship missiles, and a SeaRAM close-in weapon system that is expected to use upgraded RIM-116C Rolling Airframe Missiles. The ships will also be equipped with a vertical launch system.

Mitsubishi Heavy Industries (MHI) has launched the third of a planned fleet of 22 Mogami-class multi...