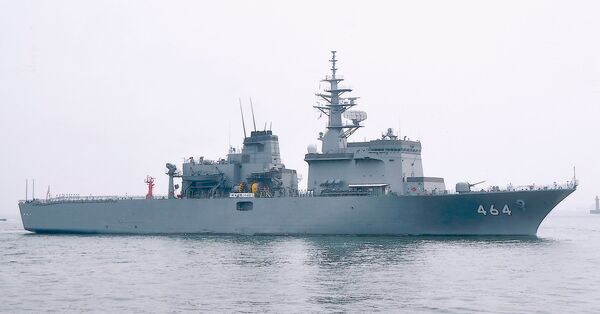 A file image of JS Bungo (464). The vessel is one of two mine-countermeasures vessels involved in a 23 June collision near Iwo Jima island. (Janes/Hachiro Nakai)

The collision took place at about 2122 h local time on 23 June, and there were no reports of inclement weather in the area at the time of the incident. Janes understands that both vessels were in the area to take part in an MCMexercise.

Aishima is the seventh of 11 Sugashima-class MCMVs operated by the JMSDF. The 54 m vessel was commissioned in 2004 and it is equipped with the NAUTIS-3M mine-monitoring system from NEC Corporation. The vessel is armed with a 20 mm Sea Vulcan gun.

Meanwhile, Bungo is the second of two Uraga-class minesweeping tenders operated by the JMSDF. The vessel has an overall length of 141 m and it can accommodate one MCH-101 mine countermeasures helicopter on its flight deck. Besides MCM operations, the vessel is also equipped with four rails that can deploy up to 200 naval mines per mission.

It is unclear if there were casualties from the collision, or if either of the vessels have been taken out of service because of the accident. However, Janes