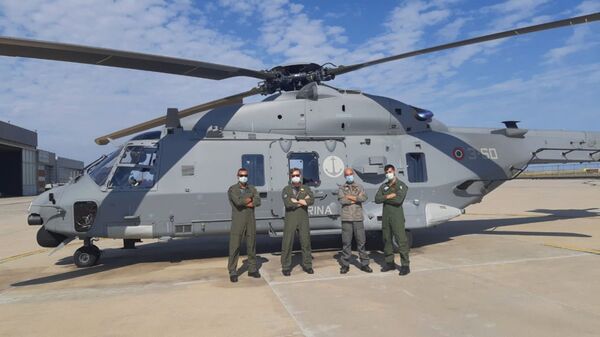 The last of 10 MH-90 MITT TTH helicopters for the Italian Navy was delivered in late August. (NHIndustries)

The event, which took place on 26 August, saw the Italian Navy (Marina Militare) receive the last of 10 MH-90 MITT TTHs at its main operating base in Luni on the country's northwest coast. “The MH-90 combines the main features of the type for land tactical transport duties, such as the rear ramp and mission equipment, together with the features of the naval NH90, for instance the optimised landing gear and dynamics for ship operations”, NHIndustries said.

The MH-90 MITT TTH will be used by the Italian Navy for amphibious support and special forces operations.

The 10 MH-90s have been procured by the Italian Navy in addition to 46 NH90 NATO Frigate Helicopter (NFH) variants, 38 of which have been received to date. The service's designation of the NH90 NFH in the anti-submarine warfare and anti-surface vessel warfare roles is SH-90A.

Janes first reported in February 2019 that NHIndustries was offering the Maritime Tactical Transport (MTT) variant of the NH90 that the Italian Navy has now adopted as the MH-90 MITT TTH. At that time, the President of NHIndustries, Vincent Dubrule, said this particular version of the NH90 was launched some years ago, and that both Italy and Spain would take 10 and seven MTTs respectively as part of their existing orders.