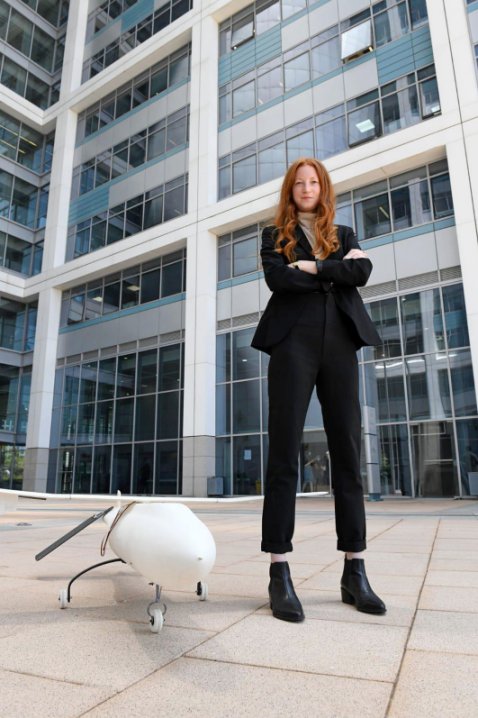 Neta Blum, the head of the Israeli MoD’s Flight Technologies Department, standing next to the SkysPrinter. (Israeli MoD)

The joint programme by the MoD’s Flight Technologies Department, part of the Directorate for Defense Research and Development, and IAI has seen the production of the SkysPrinter UAV and a successful test flight in December 2019.

The electrically powered UAV was made from 26 parts printed using metal, nylon, carbon, and complex materials. These were assembled together with glue and fasteners without the need for specialised tools. SkysPrinter's body is 1.65 m-long, has a wingspan of 1.5 m, and a take-off weight of 7 kg, according to the MoD.

Neta Blum, head of the Flight Technologies Department, introduced the idea of a 3D-printed UAV system and the MoD allocated research and development resources over the past year, leading to the test flight.

Blum told Janes a printing technique known as selective laser sintering (SLS) allows new designs of the SkysPrinter to be rapidly produced in line with operational feedback from commanders on the ground. SLS technology solidifies polymer materials in precise measurements to produce finalised parts. This way of doing it gives us new production capabilities and significant advantages,” she said.

She described a process of field feedback leading to new versions of the UAV within an unprecedentedly short time. If a heavier payload is needed, for example, the design can be adjusted so the UAV has thicker wings for a larger take-off weight.