Israel’s Camero is positioning its Xaver see-though-wall technology for networked use by unmanned systems, according to company officials.

The concept places the radars on robotic or unmanned platforms for remote control. Currently, four radars can be controlled at once, Abramovich said. It works with the Xaver 100 and Xaver 400 systems, he added.

The Xaver 100 hand-held radar was designed for teams breaching a room or a door, to give them a ‘go or no-go’ decision by simply showing if a person was behind the wall by displaying an arrow that indicates if the person is moving towards or away from the wall.

All the Xaver series systems are radar-based, and use ultra wide-band radio signals between 3 –10 GHz. They have a 120° field of view (FOV) and can see through drywall, concrete, and various structures, though not solid metal. Metal drywall studs or concrete reinforced with rebar can block the signal as well, but can still make the system function if a non-metal through-spot can be found, Abramovich said. 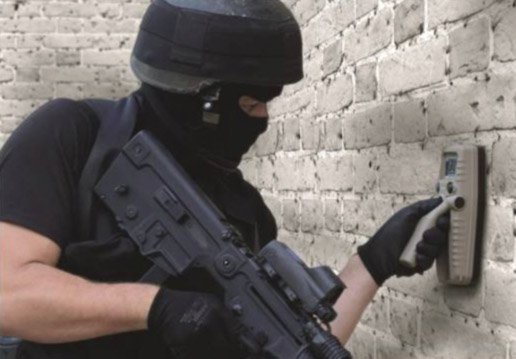 The larger Xaver 400 is still handheld, although it weighs about 3 kg and requires two hands to press against a structure for a steady radar picture. It offers several operating modes, including presenting targets as coloured squares and shows movement throughout the FOV, or as three-dimensional green splotches, noted Abramovich.

Israel’s Camero is positioning its Xaver see-though-wall technology for networked use by unmanned sy...