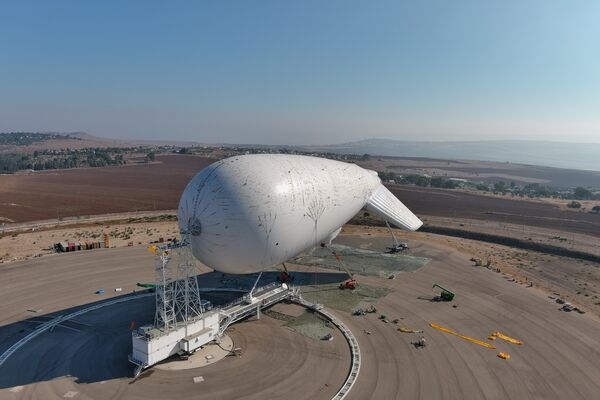 The TCOM aerostat that will carry the Sky Dew elevated radar system, at a site in northern Israel. (Israeli Ministry of Defense)

The Israeli Ministry of Defense (MoD) announced on 3 November that the Israel Missile Defense Organization (IMDO) is testing an aerostat with a new radar capable of detecting long-range threats.

It said the High Availability Aerostat System (HAAS) was made by the US company TCOM and was recently inflated at a site it has established in northern Israel. The radar has been developed with the US Missile Defense Agency, and Israel Aerospace Industries' (IAI's) Elta subsidiary is the prime contractor.

“The elevated sensor system is comprised of the HAAS and an advanced radar designed to detect incoming threats at long ranges when operating at high altitudes,” the MoD said. “It will provide additional detection and early warning capabilities to the existing operational air defence detection array deployed around Israel.”

IMDO Director Moshe Patel said the system “will cruise at high altitudes and provide an exceptional, multidirectional detection capability against advanced threats”. He added that several flight test campaigns had been conducted in recent months that demonstrated the “outstanding capabilities of Israel's multitier missile defence, including against cruise missiles”.

No further information was provided about the elevated radar system, which the Israeli Air Force (IAF) named as the Tal Shamaim (Sky Dew).

A video released by the MoD showed a tethered aerostat that was marked as TCOM 117 m but not fitted with a payload. The largest aerostat TCOM advertises is 74 m, which can carry 3,175 kg and has an operational altitude of 10,000 ft.

The Israeli Ministry of Defense (MoD) announced on 3 November that the Israel Missile Defense Organi...