Islands influence: China increases its presence and influence in the southwest Pacific 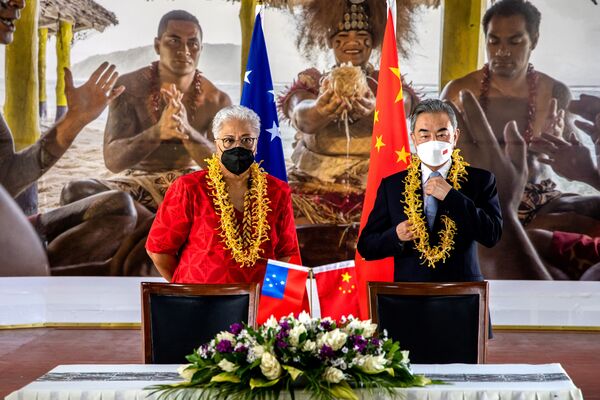 In the first half of 2022 China intensified its diplomatic efforts to increase its influence in the southwest Pacific. On 26 May, just over a month after signing a security co-operation agreement with the Solomon Islands that could grant the People's Liberation Army (PLA) military and logistics access to the country, China's Minister of Foreign Affairs Wang Yi started an unprecedented ten-day diplomatic tour in the region.

The possibility of a Chinese military base in the southwest Pacific and Beijing's efforts to influence the region's security architecture has alarmed China's regional adversaries. Australia, Japan, New Zealand, and the United States have voiced their concerns and have tried to convince Pacific nations to push back against China's growing commercial, political, and security influence in a region that is becoming increasingly important for global actors. In this context, understanding Beijing's approach, its priorities, objectives, and expectations is crucial to avoid escalation and successfully manage the challenges presented by a rising China.

Under President Xi Jinping, the main objectives of the Communist Party of China (CPC) are achieving ‘national rejuvenation' and restoring China as a global power. As a political actor incapable of gauging popular support through elections, the party's leadership seeks to constantly deliver on its political promises to avoid losing legitimacy, focusing on economic growth, prosperity, and a great power status for China in the international arena.

Consequently, Beijing has traditionally prioritised regions that produced the best returns in political and economic terms, such as the South China Sea or the African continent. However, as China's global presence grows, so does Beijing's need to engage new regions and maintain stability and protect its interests overseas. China's approach to the southwest Pacific is framed by this rationale, and the region plays an important role in Beijing's international strategic outlook at the political, economic, and geostrategic levels:

China has established comprehensive strategic partnerships with eight countries in the region, and has successfully convinced nations like the Solomon Islands and Kiribati to switch official recognition from Taipei to Beijing. Although the agreement with the Solomon Islands and Wang Yi's tour indicate an increase in Beijing's efforts to strengthen ties with nations in the southwest Pacific, these are not isolated events but a continuation of a long history of diplomatic and economic engagement.

During its 10-day tour, the Chinese delegation secured a total of 52 bilateral agreements. This included an agreement on infrastructure development with Samoa; an agreement on fisheries and police equipment with Tonga; and 10 co-operation agreements on infrastructure construction, trade, renewable energies, use of fisheries, and policing with Kiribati. Although details of these pacts have not been made public, these figures indicate an increasing alignment of interests between the Pacific Islands countries and Beijing.

However, a central objective of Wang's tour was the signature of a multilateral security and trade agreement at the Foreign Ministers Meeting on 30 May, which he failed to secure. The proposal had not been previously discussed with regional partners, which objected to China's lack of consideration and refused to sign the agreement. As Samoan Prime Minister Fiame Naomi Mata'afa explained two days after the meeting, “You cannot have regional agreement when the region hasn't met to discuss it.” Consequently, upon completion of the meeting, China's Ministry of Foreign Affairs was forced to unilaterally issue a “Position Paper on Mutual Respect and Common Development with Pacific Island Countries”, in which Bejing detailed a 15-point vision for the region as well as 24 concrete co-operation actions.

These proposed actions strongly focus on government and interpersonal exchanges, agricultural co-operation, disaster management, poverty reduction, and climate change co-operation. Crucially, the document only references security in one of the 15 points defining China's vision. This change in tone is only likely to be a temporary retreat to Beijing's tried-and-tested formula of strengthening ties through development projects after the more sensitive security agreement was refused.

Although the official transcription of the Solomon Islands security agreement has not been made public, it is plausible that its contents are close to the draft leaked online on 24 March, as neither China nor the Solomon Islands have denied its authenticity. In essence, this seven-article document creates a legal, defined mechanism for the Solomon Islands to request security assistance from Beijing, and for China to deploy the necessary forces to protect Chinese citizens and projects in the islands, including ship visits and logistical replenishment. Although Western media and governments have interpreted this as proof of the PLA's expansionist ambitions, the rationale behind this agreement is more likely to stem from the domestic situation in the Solomon Islands and Beijing's concern about its civilian presence in the country.

The Solomon Islands' two main political camps are broadly associated with the country's two largest islands. Prime Minister Manasseh Sogavare finds his political base among the inhabitants of Guadalcanal, where the capital Honiara is located, while the main opposition movement is based in Malaita, the second-largest island by surface and the largest by population.

Tensions are fuelled by political grievances, dire living conditions, discrimination, and the Malaitan perception of being neglected by Honiara. This divide has spread to the debate around the Solomon Islands' position towards China. Following Sogavare's decision in September 2019 to switch recognition from Taipei to Beijing the Malaitan opposition the prime minister and his cabinet of accepting bribes from China and stated they would switch allegiance back to Taiwan as soon as they had the opportunity.

On 24 November 2021 Malaitan opposition groups organised a peaceful demonstration against Sogavare's recognition of Beijing, but protests turned violent when he refused to meet the demonstrators. Rioters targeted government buildings and the Chinese community in Honiara, attacking the city's Chinatown and burning several buildings.

Sogavare requested Australian security assistance under the 2017 Australia-Solomon Islands Bilateral Security Treaty, and the Australian Federal Police and Australian Defence Force personnel were deployed as peacekeepers to the city. As no such agreement had been signed with Beijing, China did not have the mechanisms to deploy security forces, even if it was Chinese citizens that were primarily endangered. Chinese leadership did request permission for a special 10-person security detail on 3 December, but it is unclear whether they were effectively deployed.

The 19 April security agreement between China and the Solomon Islands creates such a mechanism. As a matter of fact, the scope, objectives, and procedures described in the draft are very similar to the 2017 agreement between the Government of Australia and the Government of Solomon Islands concerning the basis for deployment of the police, armed forces, and other personnel to Solomon Islands. Both Honiara and Beijing benefit from replicating this deal – Sogavare reduces his dependency on Australia and further strengthens his security posture domestically; China avoids relying on other regional powers to guarantee the safety of its citizens and assets while gaining a potential foothold in the region.

Perhaps the issue that has worried China's adversaries the most is the possibility of a de facto permanent PLA deployment in the Solomon Islands. Although China could use the terms of the security agreement to this end, this is an unlikely outcome for several reasons:

These outcomes would very likely have a significant impact on the region's stability, threatening Beijing's investments, commercial interests, and diplomatic position.

In the first half of 2022 China intensified its diplomatic efforts to increase its influence in the ...