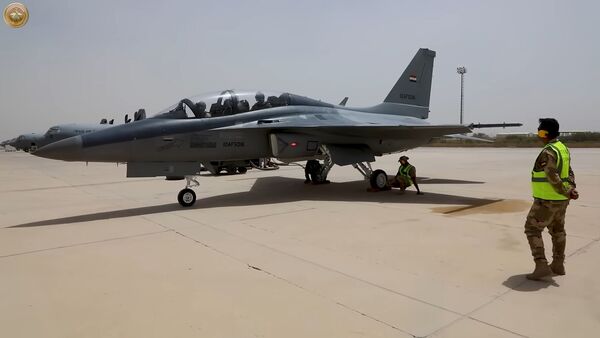 The Iraqi MoD released a video showing a T-50IQ moving down the runway, but not actually taking off. (Iraqi Ministry of Defence)

The Iraqi Ministry of Defence (MoD) announced on 22 June that one of the Iraqi Air Force's KAI T-50 jet trainer/light combat aircraft had taken off for the first time.

The MoD released a video of armed forces chief Lieutenant General Abdul Amir Rashid Yarallah visiting Martyr Muhammad Alaa Air Base next to Baghdad's international airport for an event that was attended by South Korean officials. A T-50 was shown speeding down a runway and lifting its forward undercarriage, although not actually taking off.

The Iraqi Air Force received 24 T-50IQ variant aircraft under a contract signed in December 2013, with the first being delivered in 2017. Iraqi Minister of Defence Juma Inad said in a television interview in August 2021 that the aircraft have never been used because of a funding problem.

Korea Aerospace Industries (KAI) announced on 8 November 2021 that it has signed a USD360 million contract with the Iraqi MoD to support the T-50IQs. The company said it will provide maintenance and logistics support, as well as munitions management and training for pilots and mechanics.

The MoD announced the activation of the South Korean support contract for the T-50 on 23 January.

The Iraqi Ministry of Defence (MoD) announced on 22 June that one of the Iraqi Air Force's KAI T-50 ...