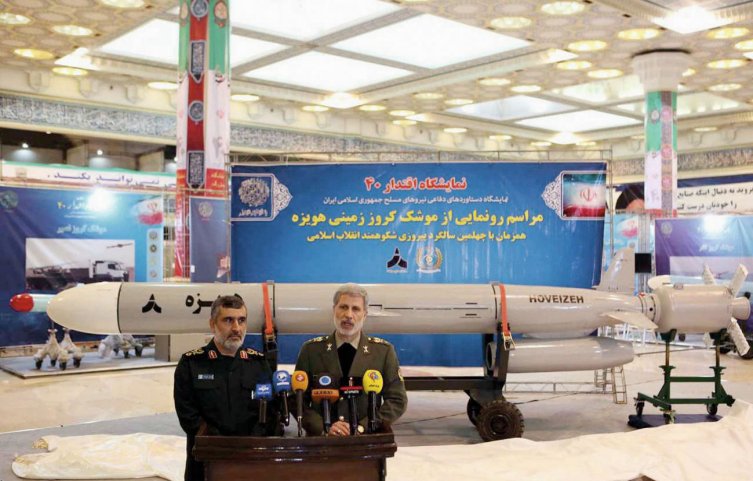 The Hoveizeh long-range ground-launched cruise missile was unveiled during the Eghtedar 40 defence exhibition in Tehran on 2 February. The display model had a larger engine than the Soumar missile unveiled in 2015. (Islamic Republic News Agency (IRNA))

Defence Minister Amir Hatami said during the ceremony that the Hoveizeh is a development of the Soumar cruise missile that was unveiled in March 2015. The Soumar appeared to be a copy of the Soviet Kh-55 air-launched cruise missile that had been adapted for ground launch by attaching a solid-fuel booster and using an air-breathing cruise engine that is fixed rather than one that drops down after launch.

“The missile has a range of over 1,350 km, can fly at a low altitude, has high precision and accuracy, and is capable of heavily destroying ground targets,” Hatami said.

He did not explain how the Hoveizeh was an improvement on the Soumar as no range figure was ever released for the latter missile. The air-breathing engine seen on the Hoveizeh model displayed at the exhibition was also noticeably longer than the one fitted to the Soumar.

Hatami added that the Hoveizeh had been successfully test fired on a 1,200 km-long range, with the defence ministry releasing footage showing a cruise missile being launched.

In contrast to the Soumar unveiling, the Iranians did not release any imagery of production examples of the Hoveizeh.

The Iranian-backed rebel group Ansar Allah (Houthis) released a video on 3 December 2017 showing what appeared to be a Soumar missile being launched in what it claimed was an attack on the Barakah nuclear power plant being built in Abu Dhabi.