Iran’s Islamic Revolution Guards Corps (IRGC) has modified an BTR-50 armoured personnel carrier by altering the shape of its hull and fitting the turret from a BMP-2 infantry fighting vehicle (IFV). 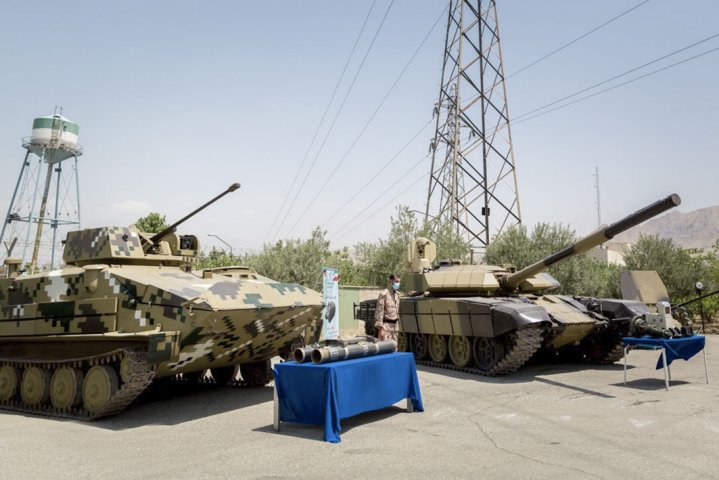 The Makran (left) is seen next to the upgraded T-72M tank. (Fars News Agency)

Unveiled as part of an exhibition put on by the IRGC Land Forces’ Self-Sufficiency and Research Jihad Organisation on 27 June, the modified BTR-50 was identified as the Makran amphibious armoured vehicle.

The Makran’s hull was built up over the frontal glacis and rear engine compartment, where a new snorkel exhaust/air intake had been added, possibly for a new engine.

A poster displayed next to it confirmed it was fitted with a BMP-2 turret armed with a 30 mm 2A42 main gun and coaxial 7.62 mm machine gun. Like the hull, this also had an additional metal structure installed around it, as well as a new electro-optical system that the Fars News Agency reported included day and thermal cameras and a laser rangefinder.

The Makran was displayed next to a T-72M tank upgraded with what appeared to be new explosive reactive armour and a remote weapon station, making it look superficially similar to the Karrar, a tank derived from the T-72 and supposedly being produced in large numbers for the Islamic Republic of Iran Army.

The Bundestag, the German parliament, approved another EUR594 million (USD662.5 million) on 11 Decem...