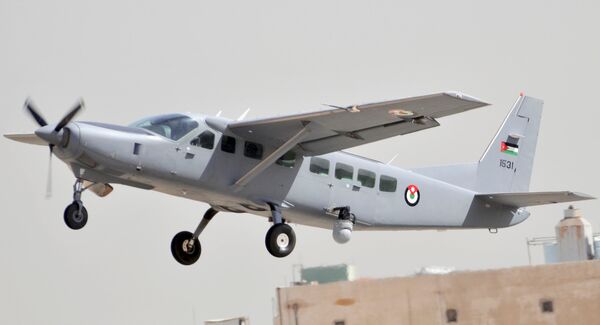 Jordan is to receive two new C-208B Grand Caravans in addition to the six it operates in the ISR role. (Janes/Patrick Allen)

The work will see the two new ‘green' aircraft delivered to IOMAX's Mooresville facility in the US in the late third quarter/early fourth quarter of 2023, at which time they will be fitted with their new ISR mission package.

“The two Grand Caravan EX single-engine turboprops will be added to a fleet of Caravans the Royal Jordanian Air Force uses extensively for intelligence, surveillance, and reconnaissance operations in the country,” CEO of IOMAX, KC Howard, told Janes. “It's a great aircraft engineered for challenging missions, high payloads, and short, unimproved runways, while delivering single-engine economy and simplicity. It is a perfect match for this mission in Jordan.”

The work will see the aircraft fitted with an electro-optic/infrared (EO/IR) sensor, operator console, tactical radio, ground surveillance radar, video datalink, and night-vision-compatible lighting. IOMAX did not provide specific system details, nor did it say when the modified aircraft will be delivered back to the RJAF.

As noted in Howard's statement, the RJAF already fields six C-208B Grand Caravans (also known as the RC‐208B in their ISR configuration), which were delivered from 2010. These are operated out of King Abdullah II Air Base by 15 Squadron.

In the same way in which the procurement of the initial six aircraft was not announced before delivery, the addition of these two follow-on aircraft was not publicly divulged prior to IOMAX's statement to Janes