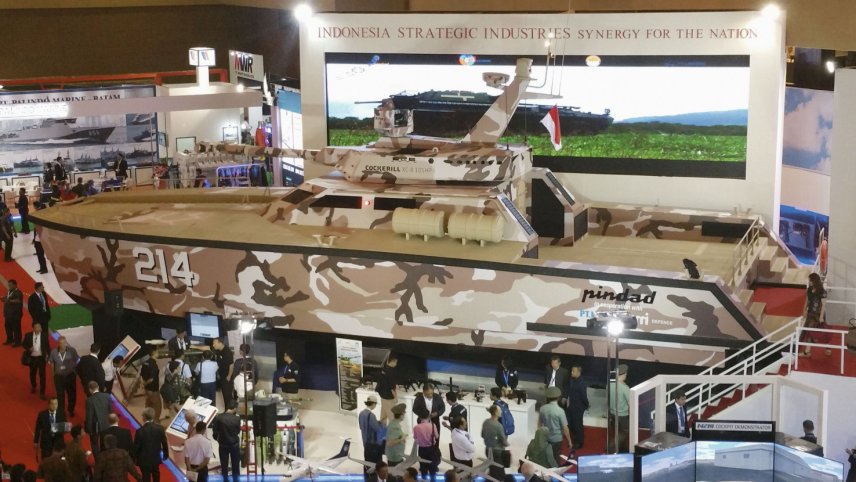 A full-sized mock-up of the tank boat at Indo Defence 2016. A prototype of the vessel was launched in waters off Banyuwangi, East Java, on 28 April. (Janes/Ridzwan Rahmat)

A concept for the 18 m vessel was first revealed by Indonesian boatbuilder PT Lundin in 2014. Other Indonesian companies that have since joined the project include PT Pindad, state-owned electronics company PT Len, and privately owned engineering firm PT Hariff. A full sized mock-up of the vessel was made public for the first time at the Indo Defence 2016 exhibition in Jakarta.

The tank boat can accommodate up to 60 passengers and five crew members, according to specifications provided by PT Pindad in a statement on 29 April. The catamaran-hulled vessel has a top speed of 40 kt and a maximum range of about 600 n miles at 9 kt, the company added.

However, unlike the full-scale mock-up that was displayed at Indo Defence 2016, the prototype has been armed with what appears to be a 30 mm gun mounted in a remote-controlled weapon station instead of the Cockerill 105 mm high-pressure gun that was initially planned.

“It is hoped that the tank boat can support the Indonesian Armed Forces in conducting patrols along Indonesia’s seas, rivers, and coasts, and also take on operations associated with the coast guard,” said PT Pindad in its statement, adding that the programme is being supported by the Indonesian defence ministry.

An Indonesian consortium led by state-owned arms manufacturer PT Pindad launched a prototype of the ...

Australia has launched initiatives to support enhanced industrial collaboration in the programme to ...

The Malaysian Ministry of Defence (MoD) has outlined the scope of some of the offsets it will secure...