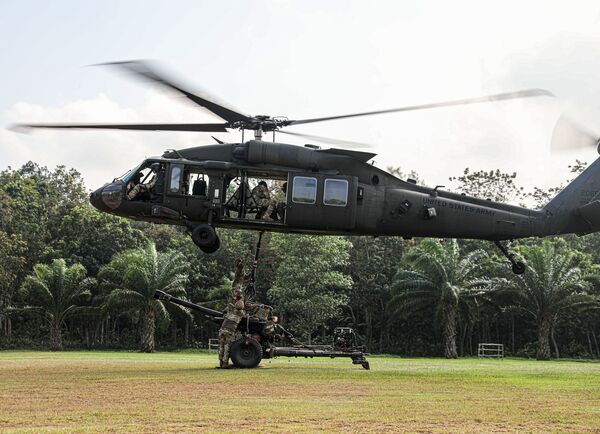 A US Army M119 105 mm howitzer being prepared for transportation by a UH-60 Black Hawk helicopter as an underslung load at exercise ‘Super Garuda Shield 2022'. (US Army)

The US and Indonesia have brought down the curtain on what has become Southeast Asia's largest multinational military exercise, part of which was held near disputed waters of the South China Sea.

The inaugural exercise, ‘Super Garuda Shield 2022', was hosted by the US Indo-Pacific Command (INDOPACOM) and the Indonesian National Armed Forces (TNI) at various locations across Indonesia from 1 to 14 August, including the Natuna Islands region.

Until 2022 ‘Garuda Shield' was an annual bilateral military exercise that has been conducted by the INDOPACOM and the TNI in Indonesia since 2007. The iteration for 2022 has been replaced with exercise Super Garuda Shield to reflect the enlarged scope and scale of the exercise, which involved more than 5,000 military personnel and various military assets from 13 countries including Australia, Canada, Japan, Singapore, and South Korea.

Citing memos from a government source, Janes first reported in April 2022 that the TNI would be hosting its US counterparts in the Natuna Islands region, which lies close to Beijing's nine-dash line of demarcation in the South China Sea, for the military exercise.

A separate government source has since confirmed with Janes that a sea phase of Super Garuda Shield was conducted in the area from 3 to 4 August. US Navy (USN) ships that were involved in this phase were namely the Independence-class Littoral Combat Ship (LCS) USS Charleston and the San Antonio-class amphibious ship USS Green Bay .

The US and Indonesia have brought down the curtain on what has become Southeast Asia's largest multi...