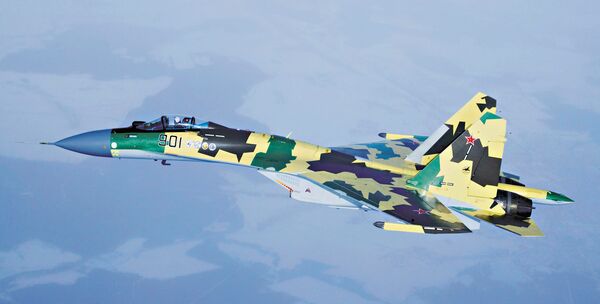 Indonesia has announced that it will not procure Su-35 multirole combat aircraft , but instead has shortlisted the Dassault Rafale and the Boeing F-15EX for the Indonesian Air Force's combat aircraft requirement. (Sukhoi)

The Indonesian government has announced that it will not proceed with the acquisition of Sukhoi Su-35 ‘Flanker-E' multirole combat aircraft. It has instead shortlisted the Dassault Rafale and the Boeing F-15EX Eagle II for the Indonesian Air Force (TNI-AU), Air Chief Marshal Fadjar Prasetyo said on 22 December.

Speaking to local media in Jakarta, Prasetyo confirmed that the Ministry of Defence (MoD) has now abandoned plans to acquire Su-35s citing its budget among its considerations. The MoD is now looking to procure enough aircraft to equip two to three fighter squadrons, he added.

Although Prasetyo did not provide details on why the deal with Russia fell through, Janes assesses that such a decision has likely been affected by disputes with Russia over counter-trade terms and concerns that the Su-35 acquisition would lead the United States to impose sanctions on Jakarta under the Countering America's Adversaries Through Sanctions Act (CAATSA).

Negotiations had already been stalled for several years. An Indonesian official told Janes in May 2020 that the country had dropped the USD1.14 billion deal for 11 Su-35s that had been provisionally agreed with Russian arms export agency Rosoboronexport in February 2018, after CAATSA was became law in July 2017.

The Indonesian government has announced that it will not proceed with the acquisition of Sukhoi Su-3...