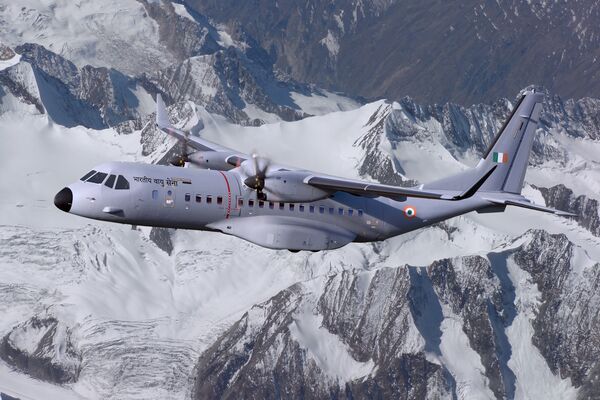 An artist's impression of what the C295 will look like in Indian Air Force Service. (Airbus)

The MoD declared in an official statement that the deal involves acquiring 16 C295s from Airbus in fly-away condition from Spain, while the remaining 40 aircraft will be built in partnership with the private-sector Tata consortium via a technology transfer.

Industry sources told Janes that the initial 16 C295s would be delivered within 48 months and the remaining 40 platforms built locally within 10 years or by 2031. The location of the facility where the latter would be constructed, however, is yet to be finalised, MoD sources said.

Although not officially declared, industry sources said the C295 acquisition, executed under the MoD's Defence Acquisition Procedure - 2011 (DPP-2011), is estimated to be worth about INR210 billion (USD2.85 billion). This includes a seven-year contract for performance-based logistics for all 56 aircraft.

They also said that 15% of the overall contract amount would be transferred to Airbus within 45 days. The deal also entails a 30% offset liability to be discharged by Airbus through India's military and civil aviation sectors.

A response to the C295 request for proposals (RfP) that was issued in 2013 was approved by India's Cabinet Committee on Security (CCS) on 8 September. It entails importing 24 of the 40 aircraft in kit form for local assembly in which 30% indigenously sourced content will need to incorporated. This is expected to double for the remaining 16 platforms, senior IAF officials said.

India's Ministry of Defence (MoD) signed a contract with Airbus Defence and Space on 24 September to...