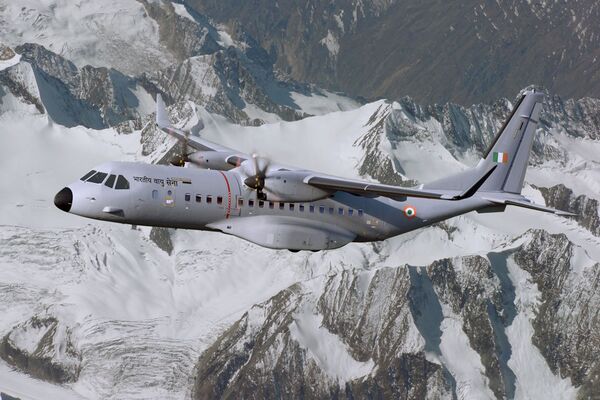 An artist's impression of a C295 in Indian Air Force markings. Deliveries are to begin from 2025. (Airbus)

India has signed for 56 Airbus Defence and Space (DS) C295 transport aircraft, with the first to be delivered in 2025.

With the procurement recently approved by India's Cabinet Committee on Security (CCS), the manufacturer announced on 24 September that the deal has now been formalised. The first 16 aircraft are to be built by Airbus in Spain, with the remaining 40 to be assembled in India by the Tata consortium – as part of a joint venture (JV) with Airbus – by the end of 2031.

“India has formalised the acquisition of 56 Airbus C295 aircraft to replace the Indian Air Force (IAF) legacy Avro fleet. It is the first ‘Make in India' aerospace programme in the private sector, involving the full development of a complete industrial ecosystem: from the manufacture to assembly, test and qualification, to delivery and maintenance of the complete lifecycle of the aircraft,” Airbus DS said.

The C295MW (Modernised, Winglets) that India is to receive is the latest variant of the twin-turboprop airlifter that has been acquired by 34 other operators, with 278 aircraft sold (200 delivered) and 500,000 flight hours accrued. Compared with the baseline C295, the C295MW has improved hot and high runway performance, with increased range, endurance, and payload, and reduced operating costs.

When deliveries are complete, the IAF will be the largest global C295 operator.

India has signed for 56 Airbus Defence and Space (DS) C295 transport aircraft, with the first to be ...