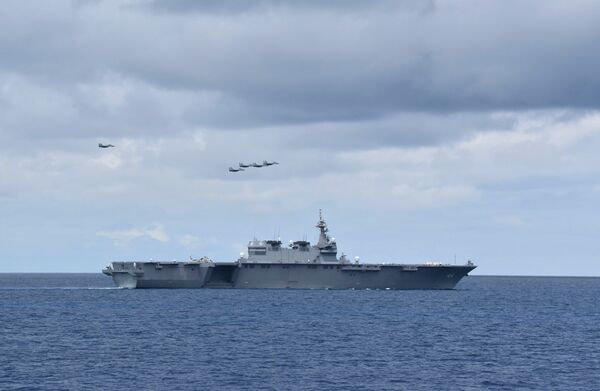 Indian MiG-29K fighters seen here at drills with the JMSDF at JIMEX 2021. (Indian Ministry of Defence)

The navies of India and Japan have further demonstrated their ability to interoperate in high-tempo operations including co-ordinated anti-submarine warfare.

The drills were carried out at the fifth iteration of the bilateral Japan‐India Maritime Exercises (JIMEX) that took place in the Arabian Sea from 6 to 8 October, the Indian Ministry of Defence (MoD) has disclosed.

The Japan Maritime Self Defense Force (JMSDF) took part in the exercise with the Izumo-class helicopter carrier JS Kaga and its lead Murasame-class destroyer.

As part of the drills the P-8I aircraft exchanged information with the JMSDF vessels during a co-ordinated hunt for a simulated submarine that was deployed by the Japanese ships, according to an Indian MoD statement.

“The complex maritime exercises undertaken will enable the two navies to further strengthen their already wide-ranging strategic partnership and, when required, to jointly safeguard their maritime interests and ensure peace, security and stability in the region”, the ministry added.

The navies of India and Japan have further demonstrated their ability to interoperate in high-tempo ...

The US Naval Sea Systems Command (NAVSEA) has established a new team focused on preventing future in...
Request Consultation