The Republic of Singapore Navy (RSN) will field 16 m-class unmanned surface vehicles (USVs) on its future multi-role combat vessels (MRCVs), a senior RSN official confirmed during a media briefing on the sidelines of the IMDEX 2019 exhibition held in Singapore from 14 to 16 May.

Senior Lieutenant Colonel Wong Chng Tong, commanding officer of 194 Squadron, noted that the RSN is looking into embarking the Venus 16 USV aboard the MRCVs. These new frigate-sized vessels replace its six upgraded but ageing Victory-class missile corvettes that entered service from 1989. 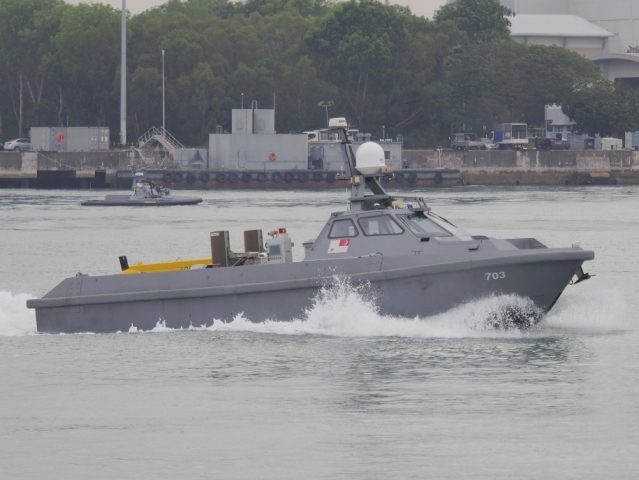 Deliveries of this new class of ships, which will essentially be modular ‘motherships’ for unmanned aerial, surface, and underwater vehicles, are expected to commence from 2025 with full delivery expected in 2030.

“Besides improving capabilities the new MRCVs will be custom-built for lean manning and incorporate technologies to automate certain functions,” Singapore defence minister Ng Eng Hen revealed during a parliamentary speech in March. “This results in the MRCV using less manpower: about half the size found in modern frigates.” This will also result in operational cost savings of up to 10%, compared with similar-sized frigates, he added.

The RSN currently operates an undisclosed number of 9 m-class Protector USVs supplied by Israel’s Rafael Advanced Defense Systems, which were understood to have been initially acquired in 2004 to support the three-month deployment of RSS Resolution , an Endurance-class amphibious transport ship, to the Middle East Gulf. Protector USVs had also been subsequently deployed to the Gulf of Aden to augment counter-piracy operations.

The Republic of Singapore Navy (RSN) will field 16 m-class unmanned surface vehicles (USVs) on its f...