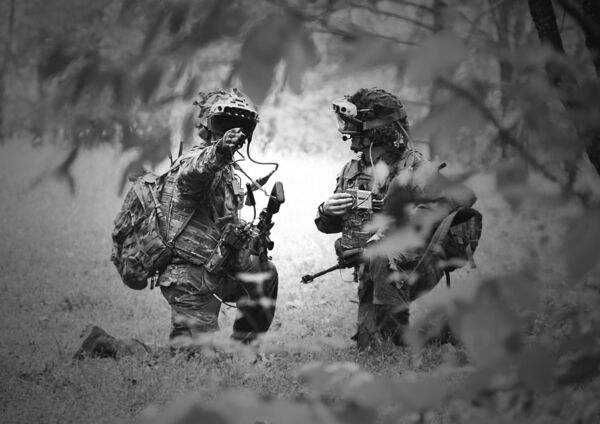 US Army soldiers from the 82nd Airborne Division use an IVAS prototype during a trench clearing exercise in October 2020 at Fort Pickett in Virginia. The army has since decided to delay fielding the technology and the Pentagon inspector general's office is auditing the programme. (US Army)

The US Department of Defense's (DoD's) Inspector General is auditing the army's militarised version of Microsoft's HoloLens 2 augmented reality (AR) system to determine if the technology will in fact meet soldiers' needs. This examination comes at a time when the service has delayed fielding the head-up display to solve performance issues, and Janes understands that it is unclear if soldiers will even be able to use the device for activities such as the often-touted, mixed-reality training capability once these fixes are in place.

On 4 October the Pentagon's inspector general notified the army that it was launching a “subject audit” into its Integrated Visual Augmentation System (IVAS) to find out if army officials “are producing and fielding” a system that will ultimately “meet capability requirements and user needs”. While the office declined to discuss the ongoing IVAS assessment and was not able to provide a timeline for its completion, it noted that this “self-initiated” project is consistent with its independent oversight of DoD programmes and operations.

“Upon completion of the audit, we will submit a final report with our findings, conclusions, and any recommendations to the DoD,” the office wrote in a 15 October email.

The investigation comes at a time when the army has not been forthright about the state of its multibillion-dollar programme, one that is now delayed by nearly a year while it fixes technical problems. Janes

The US Department of Defense's (DoD's) Inspector General is auditing the army's militarised version ...