South Korea defence company Hanwha Defense’s Multi-Purpose Unmanned Ground Vehicle (MPUGV) is set to be evaluated by the Republic of Korea Army (RoKA) in the second half of this year.

The RoKA has notified the Defense Acquisition Program Administration (DAPA) of its intention to put the ”intelligent multipurpose UGV”, which is currently being developed by the company, through further testing. An improved prototype of the MPUGV is expected to be unveiled in July. 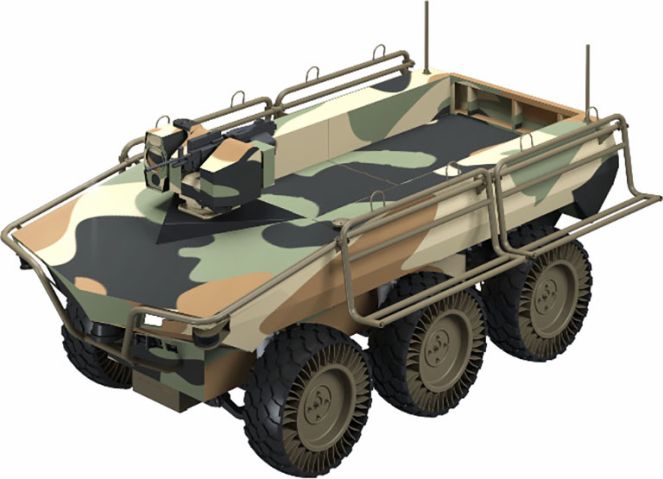 Hanwha Defense is developing an improved version of its MPUGV for further trials by the South Korean army. (DAPA)

It is understood that the service will further assess parameters such as mission performance, operation, ease of operation, and tactical operability. The vehicle had previously been trialled by the RoKA’s specialised unmanned systems unit – Dronebot Warrior – and demonstrated its various capabilities, including tele-operation, obstacle avoidance, autonomous navigation, unmanned aerial vehicle (UAV) communication, gun fire detection, and gunnery.

The prototype MPUGV will be a two tonne-class vehicle, which is designed to support infantry units and undertake various duties such as transporting supplies and ammunition, search and reconnaissance, casualty evacuation, and close combat support.

The updated design will be based on a six-wheeled platform that will offers increased speed and range on a single battery charge over its previous UGVs. According to DAPA’s specifications, the vehicle will be capable of travelling at road and cross-country speeds of up to 40 km/h and 20 km/h respectively.

It will also be expected to offer more than twice the payload capacity of the existing vehicle, which can carry up to 200 kg of stores and equipment.

South Korea’s Hyundai Rotem has been selected as prime contractor to develop technologies that would...

South Korea will develop technologies that would enable the Republic of Korea Army (RoKA) to field u...

Hyundai Rotem announced on 7 July that it has handed over to South Korea's Defense Acquisition Progr...
Request Consultation