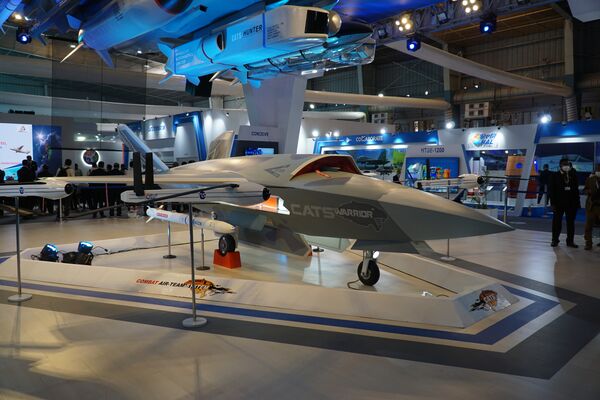 A loyal wingman programme being developed by India's Hindustan Aeronautics Limited (HAL) is on schedule to see flight-testing by 2024.

Known as the Combat Air Teaming System (CATS) Warrior, the project began in 2018 and was showcased during Aero India 2021.

The company described the Warrior as a twin-engined autonomous, unmanned combat aerial vehicle (UCAV). The aircraft is intended to operate behind or alongside manned fighter aircraft to protect their tails. The UCAV is being designed to attack aerial and ground targets.

According to an HAL source, the project has advanced since Aero India 2021.

“The CATS Warrior is currently in wind tunnel testing. Our original timetable for deployment was 2024–25 and we expect flight testing of the CATS Warrior to start in 2024,” the source told Janes .

Janes understands that the company has two indigenous engine options for the Warrior. One is HAL's PTAE-7, a 400 kg, 3.43 kN single spool turbojet developed in the 1980s. The second is HTFE-25, a 25 kN turbofan under development by HAL.

The company said that it hopes to certify the engine by 2025.

“As the CATS Warrior is a twin-engined design, we believe that using two HTFE-25 engines will give the UCAV the necessary performance to match frontline combat aircraft,” the HAL source said.

A loyal wingman programme being developed by India's Hindustan Aeronautics Limited (HAL) is on sched...