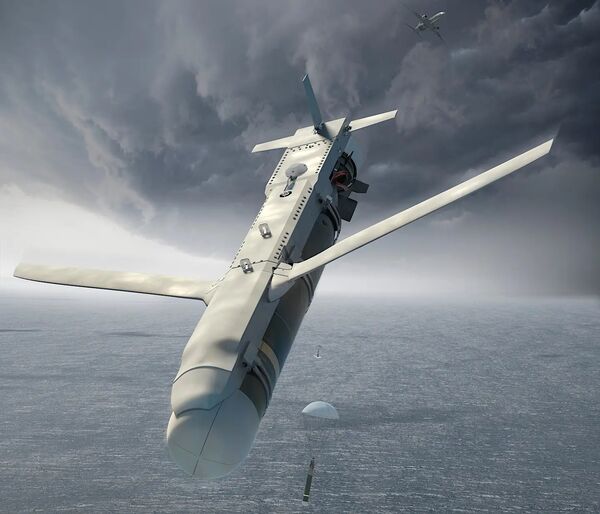 An artist's rendering of a HAAWC weapon being released from a P-8A Poseidon at altitude. (Boeing)

Designed to enable the deployment of the MK 54 lightweight torpedo from P-8A aircraft operating at altitude, the HAAWC programme introduces the Boeing-developed MK 14 MOD 0 adaptor wing kit to enable the torpedo to glide down to an acceptable altitude before release. As well as allowing employment of the MK 54 weapon from altitudes outside the current fixed-wing release envelope, the wing kit also improves delivery accuracy.

In addition, HAAWC reduces airframe stress on the P-8A aircraft by allowing it to stay at altitude to launch HAAWC-configured torpedoes, and increases the survivability of both the aircrew and the aircraft by providing safe stand-off. The P-8A will be able to accommodate up to five HAAWC weapons in its aft weapons bay.

Announcing the USN's achievement of IOC on 22 November, Boeing said the milestone followed the award of a USD25.6 million full-rate production (FRP) contract for the system in August, squadron training, and the receipt of low-rate initial production units by the navy. Additional fielding of HAAWC kits is scheduled to run through to September 2024; options in the FRP contract could extend production through to 2030 and increase the overall value to USD121.5 million.

The US Navy (USN) has confirmed an initial operational capability (IOC) for its High Altitude Anti-S...