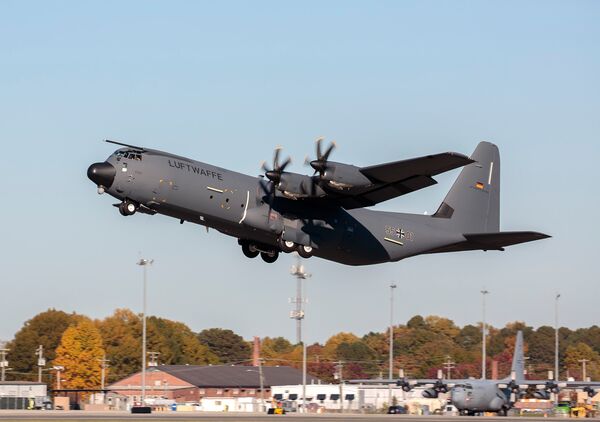 The first of six new Hercules for Germany made its maiden flight in the United States on 8 November. (Lockheed Martin)

The first Lockheed Martin C-130J Hercules aircraft for Germany made its maiden flight on 8 November, the Bundeswehr announced.

Aircraft 55 + 01 (tail number 5930) departed the company's Marietta production facility in the US state of Georgia for its inaugural test flight, ahead of delivery to the newly established Franco-German transport squadron in early 2022.

The Luftwaffe is contributing three ‘stretched' C-130J-30 airlifters and three ‘short' KC-130J tanker-transports to the joint unit it has set up with the French Air and Space Force at Air Base 123 at Orléans-Bricy, pending its move to Évreux. With France contributing two C-130J-30s and two KC-130Js, this C-130 air transport squadron will have unrestricted exchange of aircraft, air crews, and maintainers, as well as technical and logistical support based on a common pool of spare parts and a common service support contract.

As noted in the earlier US government approval for the sale, the K/C-130Js ”will provide crucial air refuelling capability to German and French fighter and light transport aircraft, as well as helicopters, at the same time as supporting deployed troops, regional security, and interoperability with the United States”.

The joint air transport squadron is slated to achieve full operating capability in 2024-5.

The first Lockheed Martin C-130J Hercules aircraft for Germany made its maiden flight on 8 November,...