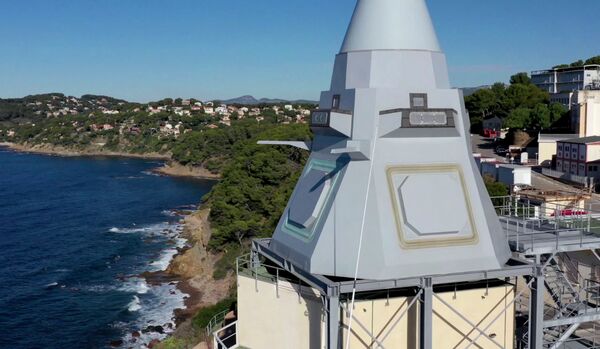 A dual-face Sea Fire system is installed at SESDA in a replica of the FDI integrated mast. (Thales)

Manufactured and integrated by Thales at its Limours site south of Paris, Sea Fire is a software-controlled 3D multifunction radar using four fixed AESA panels – based on Gallium Nitride high-power amplifier technology – to provide full 360° coverage in azimuth and 90° in elevation. Providing an update rate of up to 10 Hz, and a maximum instrumented range out to 350 km, the system is designed to perform a range of tasks, including volume search, low altitude surveillance, air/surface target tracking, environment mapping, fire control, full uplink support for Aster missiles, and kill assessment.

For the FDI application, each antenna face comprises 12 assemblies each hosting eight boards with eight transmit/receive channels for a total of 64 channels per assembly. According to Thales, element-level digital beamforming enables the Sea Fire radar to generate more than 100 simultaneous beams. Furthermore, the radar able to perform dynamic beam management so as to adapt to the relevant environment and task.