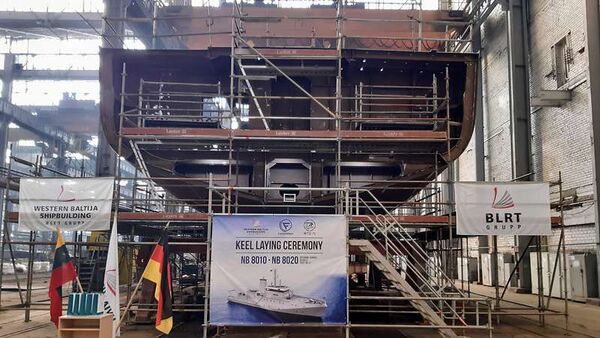 View of the building block with section 5 of the first SVK boat for Germany. (WTD 71/Thomas Wallner)

In a 7 August announcement, the Bundeswehr said a keel-laying ceremony for both boats took place at the shipyard of Western Baltija Shipbuilding in Klaipėda, Lithuania, on 22 June.

The two SVK boats are being built under a contract worth EUR95 million (USD97 million) awarded to Fassmer by the German Federal Office of Bundeswehr Equipment, Information Technology and In-Service Support (BAAINBw) on 22 July 2021.

Hull construction is taking place at the facilities of Western Baltija Shipbuilding in Lithuania, after which the boats will be transferred to Fassmer's shipyard in Berne, Germany, for outfitting. Under current plans the first boat will be transferred to Fassmer's yard for outfitting in October 2022, followed by the second boat in December 2022. The first boat is scheduled for handover to the Bundeswehr in June 2023, followed by the second boat in November 2023.

The new boats were designed according to civilian standards but taking into account the special requirements of military research and testing. They will have an overall length of 50 m, a beam of 11 m, and will be equipped with a crane and an A-frame at the stern. To ensure the high degree of manoeuvrability required for testing, the boats will each receive two 360° rotatable rudder propeller drives and two bow thrusters. Two 20 ft containers can be placed on the main deck at the stern to accommodate trials equipment.