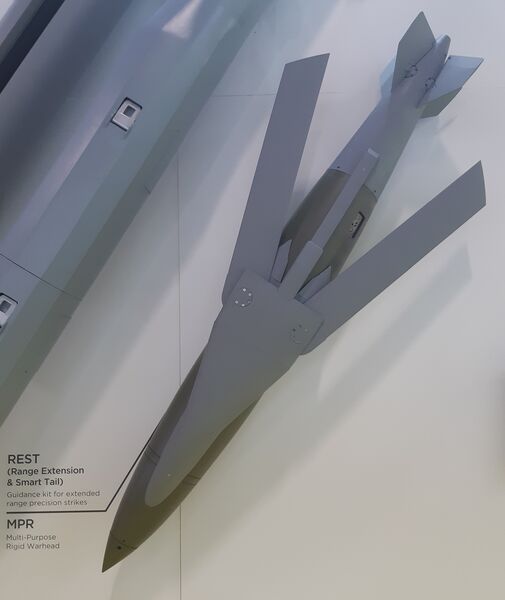 Elbit Systems has developed an applique tail and wing kit for unguided, air-launched munitions, which is intended to extend their range and enhance accuracy.

Speaking to Janes at Eurosatory 2022 defence exhibition in Paris, Nir Halamish, Elbit Systems senior vice-president for munition systems and ammunition, said that the Range Extension and Smart Tail (REST) kit can be fitted to Mk 82 and Mk 83 bombs, enabling them to strike targets out to a distance of 120 km and with a circular error probable (CEP) of 10 m when an aircraft is flying at an optimum profile of 36,000 ft and Mach 0.9.

Development of REST commenced around two and a half years ago, and was spurred by the recognition that many countries have significant stocks of unguided munitions, which would be costly to replace with modern guided types, Halamish added.

Halamish explained that the tail unit can be integrated on its own if desired, but this reduces the range to 30 km while maintaining the 10 m CEP accuracy. Adding the wing unit – which is stowed in line with the munition when carried and opens when launched – extends the range.

The manoeuvring and control over the flight of a REST-equipped munition is undertaken by the tail fins alone.

Halamish pointed to REST's ability to deliver the munition at a high angle of attack – up to 90 degrees – as a key capability, as this is important for delivering penetrating munitions such as Elbit Systems MPR 500 and MPR 1000, which can be fitted with REST.