With tensions between Greece and Turkey at their highest in decades over competing claims for territorial rights and gas reserves in the eastern Mediterranean, “all options” will be on the table to persuade Ankara to cease its belligerent behaviour in the region, according to EU officials. 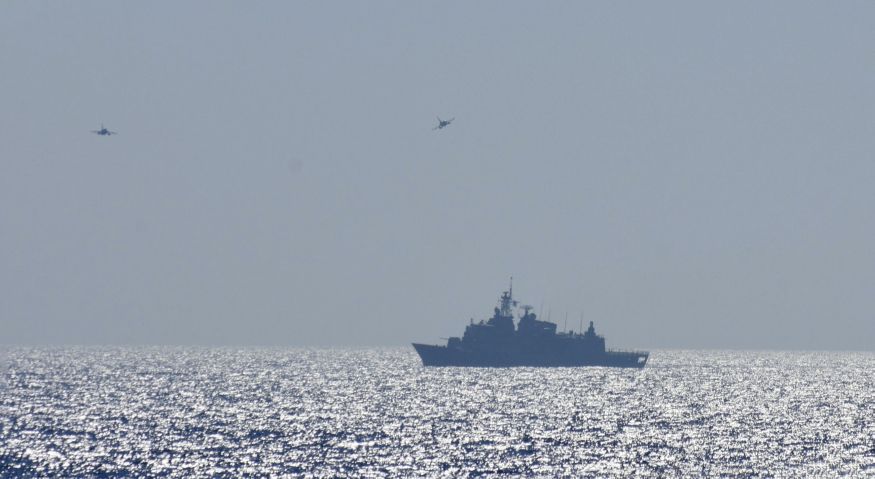 Greece held air and naval exercises with its allies in the eastern Mediterranean during the week of 24 August. (Greek General Staff)

“This situation could lead to an unwanted escalation: it needs to be defused,” German Defence Minister Annegret Kramp-Karrenbauer told reporters after a 26 August meeting in Berlin with her EU counterparts. She said new naval exercises in the region involving the two opponents “are not helpful and we all agree on that”, adding that “we must create more space to allow talks to start”.

Cyprus, France, Greece, and Italy launched three days of war games on 26 August off southern Cyprus, while the Turkish and US navies exercised nearby. This followed a joint Greek-US exercise the day before involving the Hellenic Navy frigate Aegean, a Type 214 submarine, and six Hellenic Air Force F-16 fighters, the destroyer USS Winston Churchill, and naval helicopters from both countries.

In addition, Greek newspaper Ekathimerini on 21 August reported the deployment of four F-16s by the United Arab Emirates to Souda airbase in Crete to train with the Greek armed forces. France deployed two Rafale combat aircraft to Souda on 13 August.

EU foreign and defence policy chief Josep Borrell, who briefed the ministers on the region’s security challenges, said he would present to Europe’s foreign ministers during their 27–28 August meeting “a wide set of options” regarding Turkey.

With tensions between Greece and Turkey at their highest in decades over competing claims for territ...